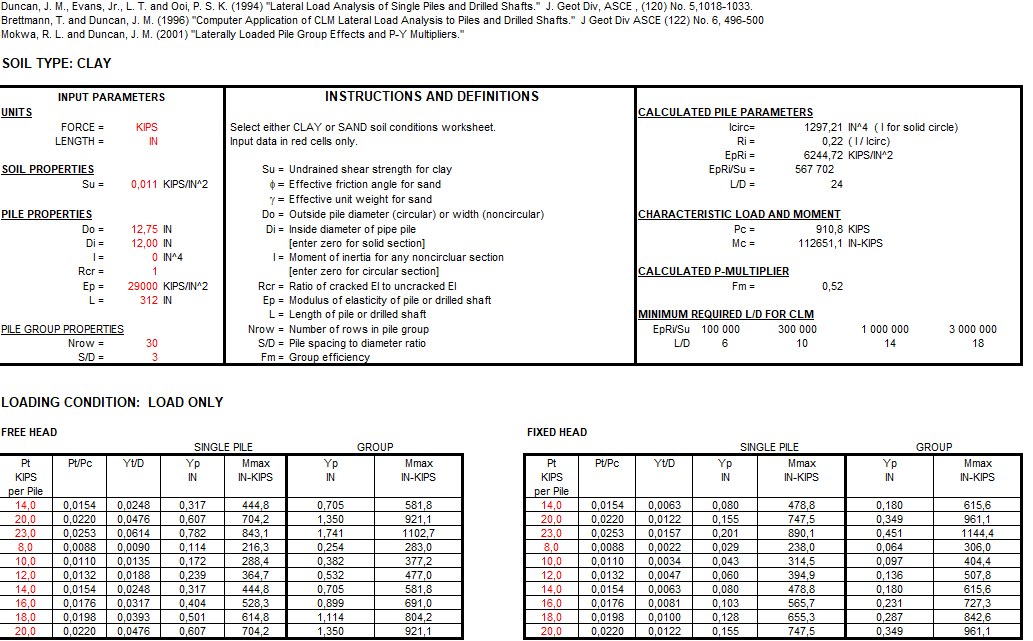 24 July 2019 Off By The Engineering Community

That first version of the CLM spreadsheet was found to produce quite accurate results for single piles, but was found in many cases to overestimate deflections and bending moments for pile groups.
The revised spreadsheet described in this report uses the same method of analysis as the original
for single piles, but uses an improved method of analysis for pile groups.

Background
The characteristic load method (CLM) of analysis of laterally loaded piles (Duncan et al., 1994) was developed by performing nonlinear p-y analyses for a wide range of free-head and fixed-head piles and drilled shafts in clay and sand. The results of the analyses were used to develop nonlinear relationships between dimensionless measures of load and deflection.

These relationships were found to be capable of representing the nonlinear behavior of single piles and drilled shafts quite accurately, producing essentially the same values of deflection and maximum moment as p-y analysis computer programs like COM624 and LpilePlus3.0.

The principal limitation of the CLM method is that it is applicable only to uniform soil conditions.
The Group Amplification Method was developed by Ooi and Duncan (1994), to extend use of the CLM method to groups of piles and drilled shafts. Values of group amplification factors for deflection and moment were computed using the method developed by Focht and Koch(1973).

The original version of the CLM spreadsheet (Brettmann and Duncan, 1996) used the CLM method to calculate deflections and bending moments in single piles, and the Group Amplification Method to calculate deflections and moments for piles in pile groups. It was found that the original version of the spreadsheet resulted in accurate values of moment and deflection for single piles, but often over-estimated deflections and bending moments for the
piles in pile groups, as judged by comparison with p-y analysis programs and the results of field
load tests.

Earthquake Lateral Forces According to UBC97 Spreadsheet
Join us on Telegram