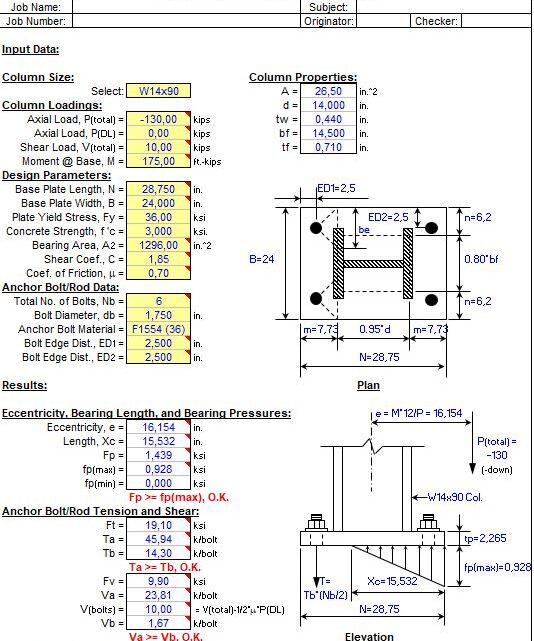 3 October 2021 Off By The Engineering Community

This spreadsheet is a program written in MS-Excel for the purpose of analysis of steel column base plates.  Specifically, wide flange column base plates may be subjected to axial loads (compression or tension), with or without major-axis column bending, plus major-axis shear.

Finally, the required base plate thickness is calculated.  There is a separate worksheet for base plate shear lug design, when shear load is high and cannot be effectively handled by bolts.

This program is a workbook consisting of four (4) worksheets, described as follows:

1.   This program follows the procedures and guidelines of the AISC 9th Edition Allowable Stress (ASD) Manual (2nd Revision, 1995) for wide flange column base plates subjected to axial compressive load only.

4.   User has option to take out some of the total shear though friction between column base and grout based on column dead load and coefficient of friction, thus reducing amount of shear to be taken by anchor bolts.

5.   This program uses the database of member dimensions and section properties from the “AISC Shapes
Database”, Version 3.0 (2001) as well as the AISC 9th Edition (ASD) Manual (1989).

6.   This program assumes that the base plate is sufficiently rigid to assume linear distribution of load to the base plate and/or anchor bolts.  (Note: adequate base plate rigidity is most likely assured if the distance  from the face of the column to the edge of the base plate is <= 4*tp.  See “General Anchorage to Concrete”, TVA Civil Design Standard DS-C1.7.1 (Rev. 1984), page 25.)

7.   Additional assumptions used in this program are as follows:
a.  The column is centered on the base plate in both directions.
b.  Axial column load, ‘P’, can be = 0  for the case with moment.
c.  The minimum area of concrete support is:  A2(min) = N*B.
d.  For a base plate supported on a slab or mat, use  A2 = 4*(N*B).
e.  Two (2) total rows of anchor bolts are allowed, one row outside of each column flange.
f.  There must be an equal number of anchor bolts in each of the two (2) rows.

8.   For cases with anchor bolt tension and base plate bearing, this program calculates the bending moment in the base plate at two locations.  One, at the column flange in compression using the bearing pressure distribution, and the other at the column flange in tension using the tension in one bolt distributed over an assumed width effective plate width based on edge distances and bolt spacing.

At both locations, the moment and resulting base plate thickness are calculated using a “cantilever” length equal to the calculated “m” distance from the AISC code.  Then, the larger of the two calculated thickness values is used for the required base plate thickness.  (Note:  this program assumes that the anchor bolts are not located in plan significantly beyond the ends of the column flange, so that corner-type plate bending does not control.)

10. The “Base Plate (Table)” worksheet enables the user to analyze/design virtually any number of individual column bases or column load combinations.  Refer to that worksheet for list of specific assumptions used.

11.  This program contains numerous “comment boxes” which contain a wide variety of information including explanations of input or output items, equations used, data tables, etc.  (Note:  presence of a “comment box” is denoted by a “red triangle” in the upper right-hand corner of a cell.  Merely move the mouse pointer to the desired cell to view the contents of that particular “comment box”.)