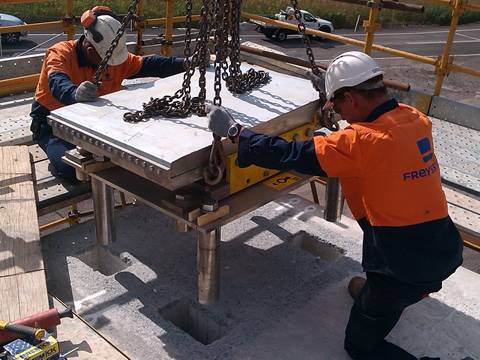 Their principal functions are as follows:

1.To transmit loads from the superstructure to the substructure, and

2.To accommodate relative movements between the superstructure and
the substructure.

Bearings may be classified in two categories:

Following are the principal types of bearings currently in use:

A pot bearing comprises a plain elastomeric disk that is confined in a shallow steel ring, or pot. Vertical loads are transmitted through a steel piston that fits closely to the steel ring (pot wall).

Translational movements are restrained in a pure pot bearing, and the gravity loads are transmitted through the steel piston moving against the pot wall. To accommodate translational movement, a PTFE sliding surface must be used. Keeper plates are often used to keep the superstructure moving in one direction.

In general, the movement accommodated by fixed and expansion bearings can be classified by the following:

A non-reinforced elastomer is placed between a precisely milled steel pot and a cylindrical lid.

Vertical loads are transmitted through a steel piston that fits closely to the steel pot wall. Flat sealing rings are used to contain the elastomer inside the pot. The elastomer behaves like a viscous fluid within the pot as the bearing rotates. Because the elastomeric pad is confined, much larger load can be carried this way than through conventional elastomeric pads.

A Uniaxial Displaceable Pot Bearing (Guided Pot Bearing) releases the lateral movements of bridge in any one direction utilizing a guide on the lid and a guiding groove in the gliding plate.

The gliding ability is accomplished by the embedded PTFE (Teflon®) disc and the gliding austenitic steel, which is welded onto the bottom of the gliding plate.

The gliding ability is accomplished by the embedded PTFE (Teflon®) disc and the gliding austenitic steel, which is welded onto the bottom of the gliding plate. 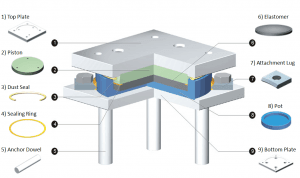 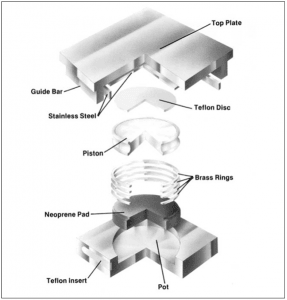 First, the vertical and horizontal loads, the rotational and translational movements from all sources including dead and live loads, wind loads, earthquake loads, creep and shrinkage, prestress, thermal and construction tolerances need to be calculated. Then, the table below may be used to tabulate these requirements. 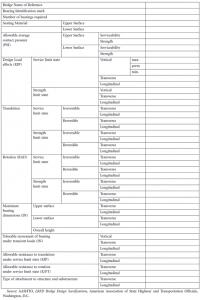 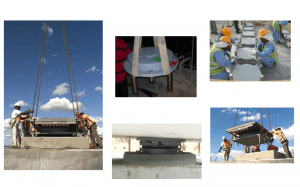