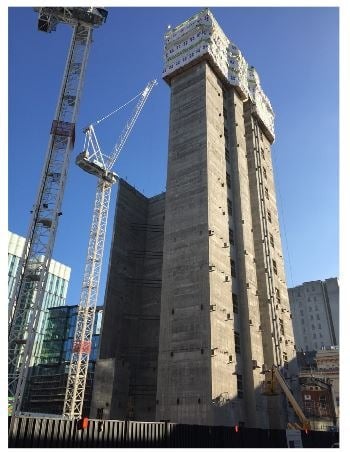 Shear walls are widely used for both tall buildings and low-rise buildings. They are important structural members used in the lateral resisting system. They work as a deep vertical cantilevered beam supported at the ground. They also carry vertical load together with columns.

Some structures may require coupled shear walls, where girders and the floor system join the two or more walls together as a coupled system to provide morestiffness.

In tall buildings, shear walls are generally located at the center of the building, normally in the form of core wall system to accommodate the vertical translation system such as lifts for the tall building. It is a very common form of lateral load support system in tall buildings.

There are two major types of cores: concrete core and steel framed cores. Concrete walls are used widely in the tall building design; on certain occasions, steel core can be found in buildings built before 9/11, they being much lighter, can save the cost of the foundation. However, they are gradually abandoned after 9/11 attack.

Fig.1 shows a concrete core for a tall building under construction. Reinforced concrete cores are a more standard option for tall buildings in general, as seen from the history, concrete structure is dominant in the market because they provide more stiffness than steel cores, and it is relatively cheaper to use a concrete core in certain countries such as China.

In certain countries such as China, the steel production was not sufficient in the past; therefore, most of the tall buildings were built in concrete. In addition, some codes require that the core of the building be constructed using reinforced concrete in case of fire and for emergency safety.

When designing a concrete core, there are several issues that must be considered: 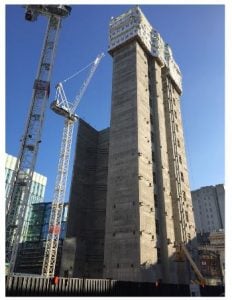 Fig.1. Concrete core of a tall building under construction

Steel core was quite common for tall building design before 9/11 attack. Most tall buildings in the United States at that time were predominantly using the structural steel for the cores. The twin towers in World Trade Center is one of the examples. It used the steel core at the center of the building. Another example is Swiss Re Tower in London, also called as 30 St Mary Axe or Gherkin.

When designing the steel-framed cores, one need to check the lateral loads, fire protection, constructability, and erection sequencing. Among them, the most important issue is the fire protections, due to the lessons learnt from the twin tower. Different fire protection strategies can be considered, such as intumescent paint, board, spray, etc.

2. The Importance of Core Design

The structural system of Twin Towers is theso-called framed tube system. An internal steel core was used for TwinTowers, the floors were made of the steel composite truss floor system, under the fire, the truss starts sagging, which pulled inward on the perimeter columns: “This led to the inward bowing of the perimeter columns and failure of the south face of WTC 1 and the east face of WTC 2, initiating the collapse of each of the towers”.

As a result of 9/11 attack, more and more design engineers began to focus on how to design a tall building to be able to resist a similar attack. Therefore, a concrete core became one of the major choices for consideration. As discussed, core is also part of evacuation route when hazards happen,therefore, concrete core would also be a good option.