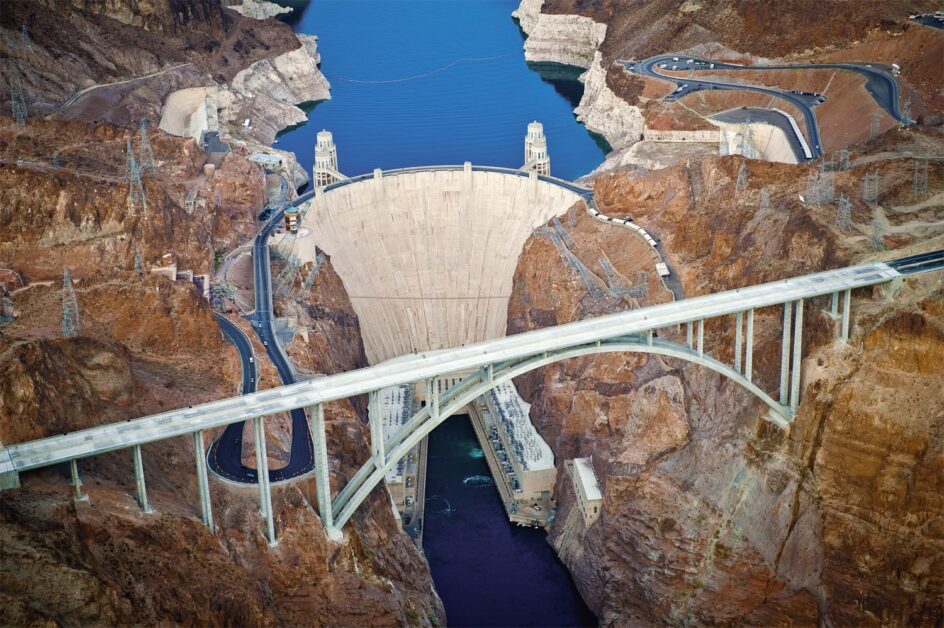 “The Greatest Dam in the World”: Building Hoover Dam

“The Greatest Dam in the World”: Building Hoover Dam

Hoover Dam is as tall as a 60-story building.  It was the highest dam in the world when it was completed in 1935.  Its base is as thick as two football fields are long.

Each spillway, designed to let floodwaters pass without harming the dam itself, can handle the volume of water that flows over Niagara Falls.

The amount of concrete used in building it was enough to pave a road stretching from San Francisco to New York City.

The dam had to be big.  It held back what was then, and still is, the largest man-made lake in the United States.

The amount of water in the lake, when full, could cover the whole state of Connecticut ten feet deep.  Only a huge dam could stand up to the pressure of so much water.

Building such a mammoth structure presented unprecedented challenges to the engineers of the Bureau of Reclamation.

It stretched the abilities of its builders to the limits.  It claimed the lives of 96 of the 21,000 men who worked on it.

Construction began in 1931.  Americans began coming to see the big dam long before it was completed four years later.  Most had to travel many miles, at the end through a hostile desert, to reach this location on the border between Nevada and Arizona.

The builders soon constructed an observation platform on the canyon rim to keep the tourists away from the construction site.

Hoover Dam did, and continues to do, all the things its supporters hoped it would.

It protects southern California and Arizona from the disastrous floods for which the Colorado had been famous.

It supplies water and power to Los Angeles and other rapidly growing cities in the Southwest.  But the dam also had an entirely unexpected result, one that began while it was still under construction.

For millions of people in the 1930s, including those who would never visit it, Hoover Dam came to symbolize what American industry and American workers could do, even in the depths of the Great Depression.

In the early 21st century, almost a million people still come to visit the huge dam every year.

The Gotthard Base Tunnel