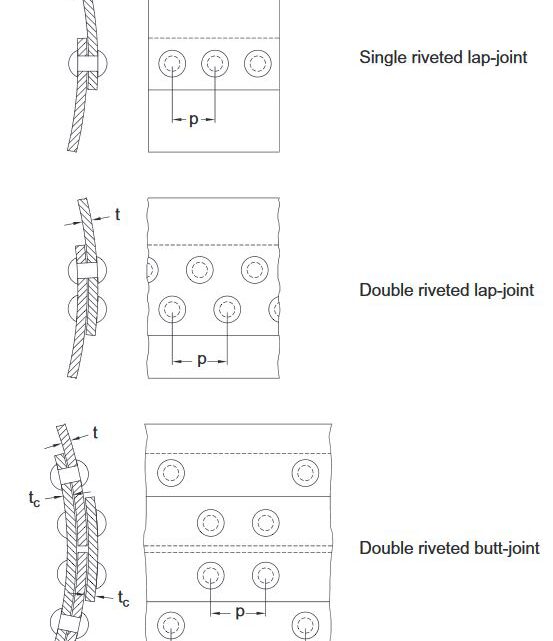 What are Rivet Connections?

16 January 2021 Off By The Engineering Community

What are Rivet Connections?

Rivets are non threaded fasteners that are usually manufactured from steel or aluminium. They consist of a preformed head and shank, which is inserted into the material tobe joined and the second head that enables the rivet to function as a fastener is formedon the free end by a variety of means known as setting.

A conventional rivet before and after setting is illustrated in Fig. 1.

Fig.1 Conventional rivet before and after setting

Rivets are widely used to join components in aircraft (e.g. see Fig.2) boilers, ships and boxes and other enclosures. Rivets tend to be much cheaper to install than bolts and the process can be readily automated with single riveting machines capable of installing thousands of rivets an hour.

Fig 2. Two historical examples of the use of rivets on the Lockheed Electra and RB211engine nacelle.

Rivets can be made from any ductile material such as carbon steel, aluminium and brass. A variety of coatings are available to improve corrosion resistance. Care needs to be taken in the selection of material and coating to avoid the possibility of corrosion by galvanic action.

In general a given size rivet will be not as strong as the equivalent threaded fastener.

The two main types of rivet are tubular and blind and each type are available in amultitude of varieties. The advantage of blind rivets (Fig.3) is that they require access to only one side of the joint.

Fig 3. An example of the application of a closed end blind rivet

A further type of rivet with potentially many over-all advantages, from the production perspective, is the self-piercing rivet that does not require a predrilled hole. The rivet is driven into the target materials with high force, piercing the top sheets and spreading outwards into the bottom sheet of material under the influence of an upsetting die to form the joint.

Factors in the design and specification of rivets include the size, type and material for the rivet, the type of joint, and the spacing between rivets.

There are two main types of riveted joint: lap-joints and butt-joints(Fig.4). 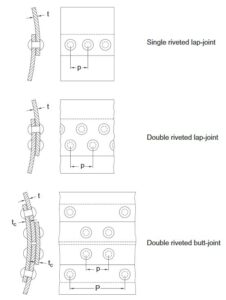