you are here Accueil | ENGINEERING ARTICLES | Civil Engineering Articles | Construction | What is Footing ? Types Of Footings 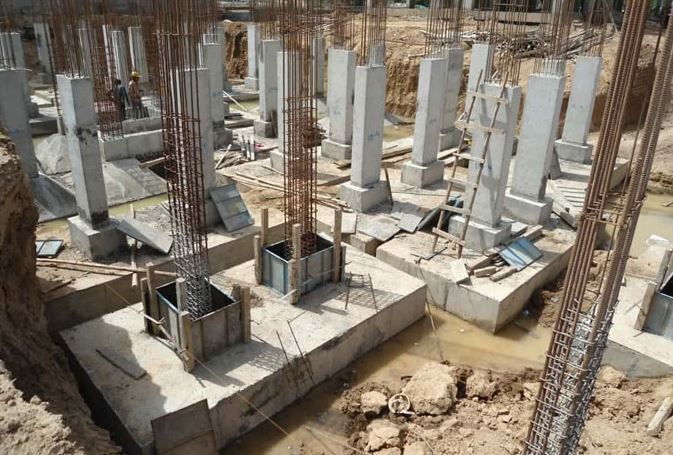 What is Footing ? Types Of Footings

17 July 2021 Off By The Engineering Community

What is Footing ? Types Of Footings

Foundation is the main part of any type of structure (Buildings, bridges, tunnels…). It distributes the weight of the structure over a large area of soil, avoid unequal settlement, increase structural stability and prevent lateral movement of structure.

The selection of footing depends on the following factors:

The different types of footings used for building construction are listed below:

Strip footings (known as strip foundations) are a shallow foundation type, usually boasting a foundation level that is no greater than 3m from the ground surface.

Very broadly, the size and position of strip foundations is typically related to the wall’s overall width. The depth a traditional strip foundation is generally equal to or greater than the overall wall width, and the foundation width is generally three times the width of the supported wall. This results in the load being transmitted at 45º from the wall base to the soil. 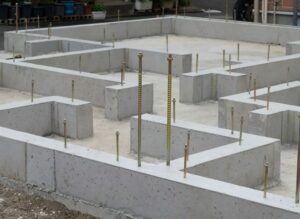 The spread footing is utilized to support the column & walls and additionally to convey & disseminate the load coming to the structure to the soil below it.

With loads provided within the upward direction, this footing actually acts like an inverted cantilever, and this sort of footing is typically a rigid element & they’re orthogonal just in case of symmetric footing.

As the name suggests, a spread is given under the base of the foundation so that the load of the structure is distributed on wide area of the soil in such a way that the safe bearing capacity of soil is not exceeded.

Isolated footings (also known as Pad or Spread footings) are commonly used for shallow foundations in order to carry and spread concentrated loads, caused for example by columns or pillars.

Isolated footings can consist either of reinforced or non-reinforced material. For the non-reinforced footing however, the height of the footing has to be bigger in order to provide the necessary spreading of load.

Its thickness is constant and its shape can be circular, rectangular or square. It is economic and requires less excavation but its size is highly depended on the load and it is less resistant in lateral forces.

This type of footing includes the construction of a footing step by step until it reaches the desired width. This technique is mostly used in residential buildings but its utilization has been decayed over the last decades.

The stepped footing is a simple type of isolated footing which is provided over soil having less bearing capacity. Because of low soil capacity load need to be transferred on the larger area.

Stepped footings are also used to keep metal columns away from direct contact with soil to save them from corrosion effects. This type of footing carries the load of metal columns and transmit this load to the underground. 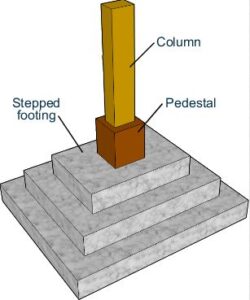 Whenever two or more columns in a straight line are carried on a single spread footing, it is called a combined footing. Isolated footings for each column are generally the economical. Combined footings are provided only when it is absolutely necessary, as 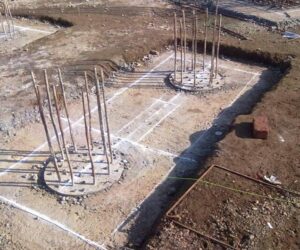 The strapped footings having sloping top or side faces are known as sloped footings. This type of footing is useful in the construction of formwork.

Sloped or trapezoidal footings are designed and executed with utmost attention to maintain a top slope of 45 degrees from all sides. The amount of reinforcement and concrete used in the sloped footing construction is less than that of plain isolated footing. Therefore, it decreases the utilization of concrete and reinforcement. 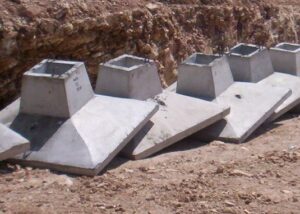 A strap footing usually supports two columns, so it’s a special type of combined footing. If a property line exists at or near the edge of an exterior column, a normal isolated footing would be placed eccentrically under this column and it would tend to tilt.

This problem may be prevented by connecting this footing with the adjacent interior footing with a strap concrete beam. The use of a strap footing may be justifiable where the distance between columns is long and a regular combined footing is impractical due to the required large excavation. 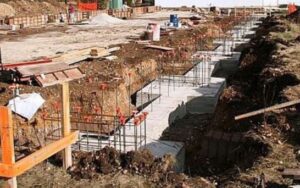