you are here Accueil | ENGINEERING ARTICLES | Civil Engineering Articles | Construction | What is Soil-Cement? Advantages and Disadvantages 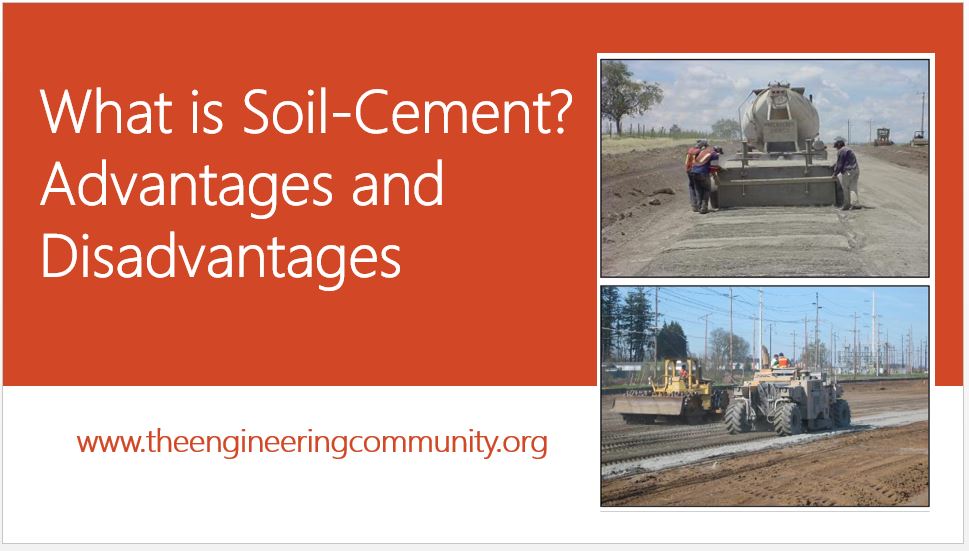 What is Soil-Cement? Advantages and Disadvantages

20 November 2021 Off By The Engineering Community

What is Soil-Cement? Advantages and Disadvantages

Soil-cement is a mixture of soil and measured amount of cement, and water compacted at high density. They all together form a hardened mixture like concrete, under the hydration action of cement.

Soil cement is used to strengthen underlying soil conditions to support traffic loading. Cement stabilized base is also a common application to strengthen the base section directly underneath rigid or flexible pavements. Soil-cement can be used when paving roads, parking lots, airports, residential streets, and more. It’s a cost-effective pavement base known for its strength and durability.

Soil-cement is also called the cement-stabilized base, or cement-treated aggregate base.

It is primarily used as a base course for-

It is also used for:

How is soil-cement created?

First, rigorous laboratory tests are conducted to determine the cement and moisture content required to achieve the design compressive strength at a specific compactive effort. This analysis is then frequently referred to throughout the construction process to ensure that the soil-cement is of the highest quality.

Once the specific components of the mixture are decided, the material is mixed either in a central mixing plant or in-place. With central mixing plants, the soil-cement is first mixed and then brought to the job site. With in-place soil-cement construction, the mixing is done on-site. This involves first spreading the cement on the in-place soil. The cement, soil, and water are then mixed to a uniform consistency. During the final stages, the mixture goes through processes of compaction within a specified time limit and is cured. The curing process ensures that the soil-cement created is at its maximum strength.

Main processes involved in the construction of soil-cement are:

At the central mixing plant, mixing of the soil-cement mixture is done. The final mixture is then moved to the job site and laid over the already prepared sub-grade level.

Initially, a proper quantity of cement is being spread over the soil and mixed homogeneously. Then a measured amount of water is added and mixed thoroughly. The mixing can be done by hands or with mixing equipment or machines.

Now the compaction of the whole mixture is done by normally used compaction equipment. The compaction is done with high precision to achieve the maximum advantage of the cement used.

Once it is done, the whole mixture layer is cemented permanently at a very high density. After compaction, it won’t let the soil to undergo further consolidation or settlement under huge traffic.

The last step is curing. It is performed to prevent evaporation of water to the atmosphere. Proper cement hydration will be enabled only with an adequate amount of water. For this, a bituminous coating is laid over the layer and would act as a bituminous surface. The thickness of the layer can be increased if the pavement is constructed in an area with huge traffic.