you are here Accueil | Non classé | What is a Buttress Dam ? Types, advantages and disadvantages 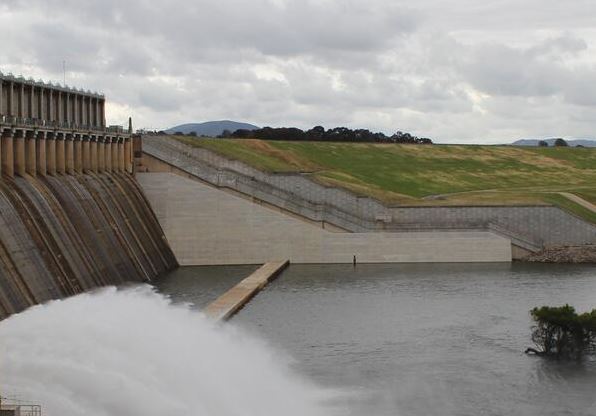 20 November 2021 Off By The Engineering Community

A buttress dam is also called as a hollow dam. It is a dam with a solid, water-tight upstream side that is supported at intervals on the downstream side by a series of supports. A reinforced concrete slab or a series of arches or thickened buttress heads may form the sloping membrane for retaining the upstream water.  At the upstream end, a cut-off is provided to prevent or reduce the seepage of water.

A buttress is a thin wall of triangular profile shape. It has a characteristic of sloping upstream face. It is usually spaced at equal interval along the length of the dam and is supported either on a continuous mat foundation or on a separate spread footing. Each arch of the dam is supported by the buttresses. Multiple arch buttress dams are more durable and flexible than other buttress dams, such as a deck slab buttress dam.

The deck slab buttress dam can be categorized into three types:

Buttress dams can be referred to as a gravity dam. The dam in which the concrete and material of the dam are designed to hold all the horizontal force and pressure of the water. Water pressure is distributed to the slabs of the Buttresses. Distributing the forces will reduce the load on the wall, allowing the dam to last longer.

In this type of buttress dam, the sloping membrane or deck consists of a series of reinforced-concrete arches supported by a number of buttresses. The upstream face of the dam is usually inclined at 45. The arches are cast monolithically with the buttresses. Multiple arch buttress dams are more durable and flexible than other buttress dams, such as a deck slab buttress dam. The dam can be constructed as a singular stiffened wall or a double hollow one. The biggest disadvantage of the dam is that buttresses depend on each other. It means that if one buttress develops problems the whole dam will lose its efficiency. This dam is suitable for larger heights preferably above 50 meters.

In this type of Buttress dam, the sloping membrane or deck consists of a series of reinforced-concrete domes supported by a number of buttresses. Most of the characteristics are the same as a multiple arch dam, however, instead of having arches it has domes.  Using multiple domes help to reduce the number of buttresses required to make the dam stable.  The main benefit is that the domes can be spaced farther apart than arches can be placed. It helps in reducing cost and saving material during designing of the dam.

The main feature of this type of dam is, there is no separate water-retaining member is provided and the water-retaining member is formed only by enlarging the upstream end side of the buttress. Thus the dam is made with a series of buttresses and massive heads placed side by side. They are constructed with concrete mass and little reinforcement. This makes its construction relatively easy compared to other types of buttress dams. The weight of the concrete makes massive head buttress dams very heavy, and very resistant to sliding.

Disadvantages of a Buttress dam

What is Soil-Cement? Advantages and Disadvantages
Join us on Telegram