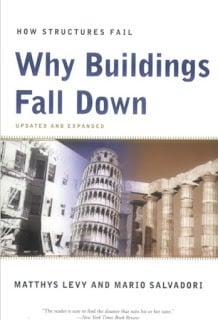 Why buildings fall down how structures fail

7 December 2017 Off By The Engineering Community

Why buildings fall down: how structures fail

Once upon a time there were Seven Wonders of the World.
Now only one survives: the mountainlike Pyramid of Khufu in the Egyptian desert near Cairo.

The other six have fallen down.
It is the destiny of the man-made environment to vanish, but we, short lived men and women, look at our buildings so convinced they will stand forever that when some do collapse,

we are surprised and concerned.
Our surprise may be partly due to the fact that most of us judge buildings by their facades:
They look beautiful when very old and ugly when very young, the opposite of human faces.
But this kind of judgment is superficial and misleading; a much better metaphor
for a building is the human body.
A building is conceived when designed, born when built, alive while standing, dead from old age or an unexpected accident.
It  breathes through the mouth of its windows and the lungs of its airconditioning system.
It circulates fluids through the veins and arteries of its pipes and sends messages to all parts of its body through the nervous system of its electric wires.
A building reacts  to changes in its outer or inner conditions through its brain of feedback systems, is protected by the skin of its facade, supported by the skeleton of its columns, beams, and slabs, and rests on the feet of its foundations.
Like most human bodies, most buildings have full lives, and then they die.
[su_button url=”https://drive.google.com/open?id=1wWR_Bnk-x1JO4R710HYz55OaomJg8fur” size=”7″ center=”yes”] Download Link[/su_button]

Failures in Concrete Structures
Join us on Telegram