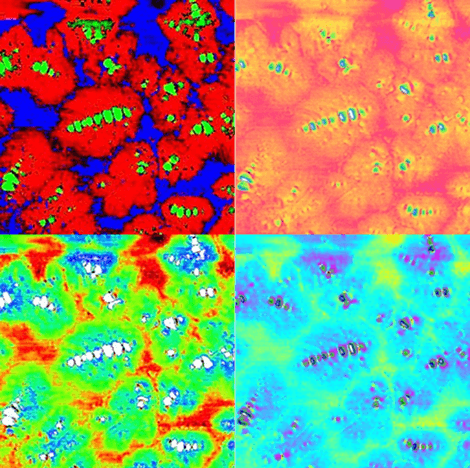 The adhesive properties bitumen has been studied extensively due to its relevance in road construction. Further understanding on the stage of failure associated with temperature and strain rates, overall performance of bitumen as an adhesive is of high importance to the construction industry.

Dr. Hartmut Fischer and Dr. Steven Mookhoek from TNO Technical Sciences in the Netherlands studied the effects and performance of the microstructure of various samples of bitumen with comparable PEN grade (Q8, Esso, Nynas, Shell, Total and Venezuelan). The work which is published in the peer-reviewed journal, Construction and Building Materials achieved this feat by making use of a newly designed micro-tensile testing (µ-DDT) to evaluate the adhesive performance of the bituminous binders with the use of a glass-silica half ball configuration in the tensile test setup. Results were coupled the observed features in the microstructure, as determined by use of an atomic force microscopy and differential thermal analysis on the bitumen samples.

The newly evolved micro-tensile test was found to be powerful in determining adhesive/cohesive forces between the formed bonds of different bitumen samples with silica at certain strain rates, with a clear view of the adhered area from residual materials on the half-ball silica surface.

In differential thermal analysis it was observed that an equal mixture of the bitumen samples with glass spheres and with Wigras filler material had a loss in thermal transition due to reduction in asphaltenes inside the bitumen samples after addition of filler particles. From this observation, asphaltenes can be said to be a strong requirement for good adhesion. The Nynas bitumen sample in contrast to other bitumen samples did not show the formation of a catana phase, and resulted in a poor adhesion to the glass-silica surface.

A two-step response was recorded with appreciate to normal force, cavitation and cohesive rupture for all bitumen specimens with a prolonged peri phase or a co-continuous micro structure except for that of Nynas, leading to a strong correlation between measurable bond strength and that of the catana/peri phase area.

This study provides a new technique to further our knowledge on performance of bitumen as binding agent which might produce advanced and higher performance materials for pavements and highway applications.

Hartmut R. Fischer, Steven D. Mookhoek. A Study of the Influence of the Microstructure of One Type of Bitumen Grade on the Performance as a Binder, Construction and Building Materials

Design and Construction of Tunnels: Analysis of Controlled Deformations in Rocks and Soils

A drone for last-centimeter delivery
Join us on Telegram