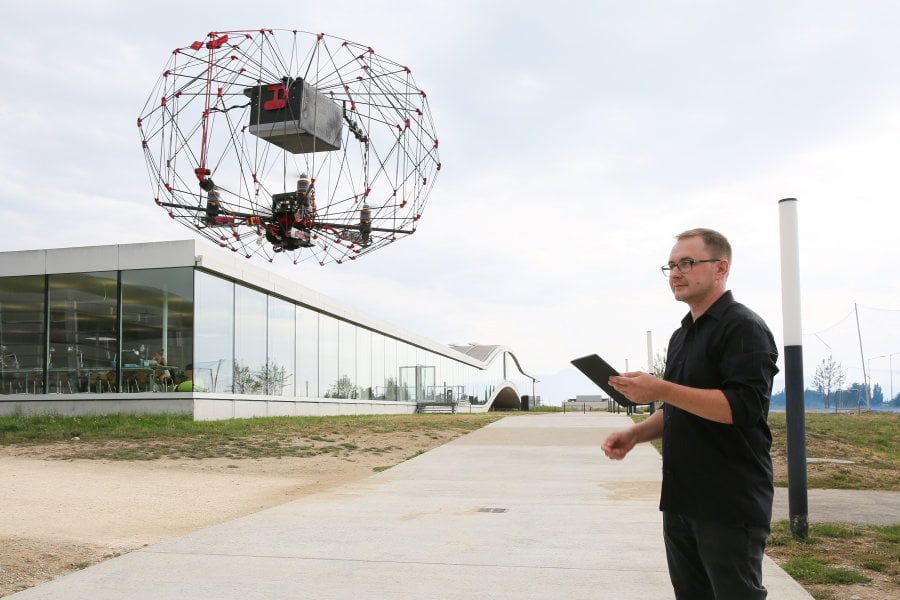 A new drone developed at EPFL uses cutting-edge technology to deliver parcels weighing up to 500 grams. The device will never get stuck in traffic, it’s programmed to avoid obstacles, and it can reach destinations on steep or uneven terrain. Its protective cage and foldable design mean that it can be carried around in a backpack and used in total safety.

With a drone, things like letters, medicine, first-aid supplies and food can be delivered quickly, cheaply and autonomously without having to worry about traffic, blocked roads or a lack of roads. Some companies will surely come to rely on these drones. And engineers will be called on to develop ever more sophisticated models to keep pace with this new facet of e-commerce.

The drone, which has been designed in EPFL’s Laboratory of Intelligent Systems with funding of NCCR Robotics, is equipped with several innovations that make it particularly safe, autonomous and easy to transport.

The unique idea here is that the drone becomes the package that wraps around the cargo before flight, just like a mail package. The foldable carbon-fiber cage protects the drone and the cargo in case of a collision or fall. What’s more, the recipient can catch the drone mid-flight without being injured by the propellers, which are located within the structure and have a safety system so that they stop when the cage is opened.

The origami-inspired design means that the frame can be folded and unfolded in a single movement. It can be flattened in just a few seconds, reducing the drone’s volume by 92% so that it can easily be slipped inside a backpack.

The drone — a multicopter with four propellers — can take off and land vertically, which enhances its accuracy. And it can carry a package weighing up to 500 grams over a distance of 2 kilometers.

The drone contains specially designed self-flying software to program the delivery. A flight plan is created to ensure it avoids obstacles such as trees and buildings. The drone can then be tracked in real time on a tablet or smartphone. And once the package has been delivered, the drone makes its way back on its own. The device also has a safety system to prevent it from being hacked.

“This project is a work in progress — in addition to strengthening its ability to detect and avoid objects, we are exploring possibilities to increase the drone’s payload capacity and enhance its autonomy, “says Przemyslaw Kornatowski, who developed the drone. “Throughout the summer, we tested our human-friendly, drone-delivery system on the EPFL campus, delivering items to people over 150 test flights.” The drone will also have a parachute to increase its safety in the event of a breakdown.