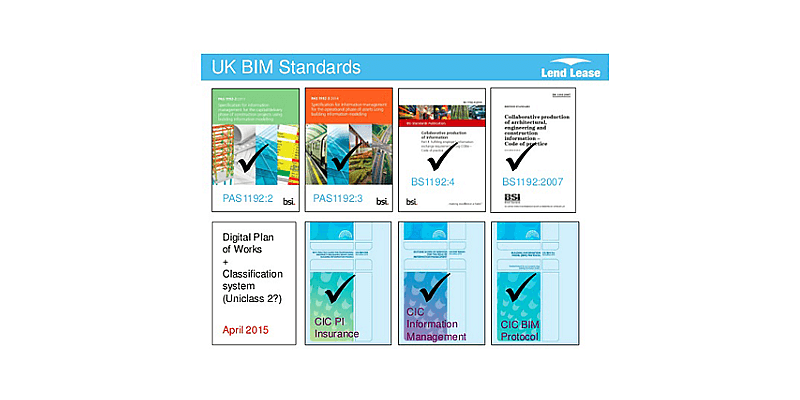 BIM GUIDELINES AROUND THE WORLD

18 April 2019 Off By The Engineering Community

BIM GUIDELINES AROUND THE WORLD

All BIM guidelines in the world include 4 major parts:

Until 2015 in the USA, some independent departments of states published 47 BIM   guidelines, standards to implement BIM efficiently, in which 17 were published by the government office and 30 were published by non-profit organizations. General Services Administration (GSA) plans to publish 8 BIM independent instructions.

They have published 6 instructions during 2007 to 2011 and a further 2 instructions are to be published. National Institute of Building Sciences (NIBS) published 2 BIM standard versions and prepared to publish the 3rd. In addition, the American Institute of Architects (AIA), Association of General Contractors (AGC), universities, states and cities also published  their BIM  guidelines and standards. In which, publishers of Pennsylvania state university and the Association of contractors have covered all 4 major parts mentioned above. However a number of BIM guidelines developed do not cover all the 4 major parts well, i.e. the Level of Details (LOD’s).

Today in Europe there are over 34 BIM instructions and standards, in which, 18 have been published in United Kingdom by Construction Industry Council (CIC), BIM Task Group, British Standards Institution (BSI), AEC-UK,  6 have been published in Norway by Statsbygg – a government department and Norway Association of construction. There are BIM guidelines developed in Finland, Denmark, and Sweden, where the BIM application instructions are set out for buildings, infrastructure and bridges. It is noteable that almost all publishers in Europe lacks 2 parts: PEP and LODs.  Only the BIM  specification of AEC-UK covers all of the 4 parts.

In Asia, there are over 35 BIM protocols, in which, 12 were published by Singapore Building Construction Authority (BCA) and other government departments. Others BIM protocols have been published in Korea, Japan, China, Taiwan and Hong Kong.

These are similar to Europe in that all lack 2 parts: PEP and LODs. Only version 2 of BCS has covered the full 4 parts.  This clearly shows that the countries in the world, which have applied BIM, published several BIM instructions and standards are focusing the requirements to their industry adoption.  However in my opinion we need a recognised more rounded, regional or international BIM  guideline, standard, specification to get more adoption and benefits for the wider BIM community.

How To Create A Good Revit Template Success