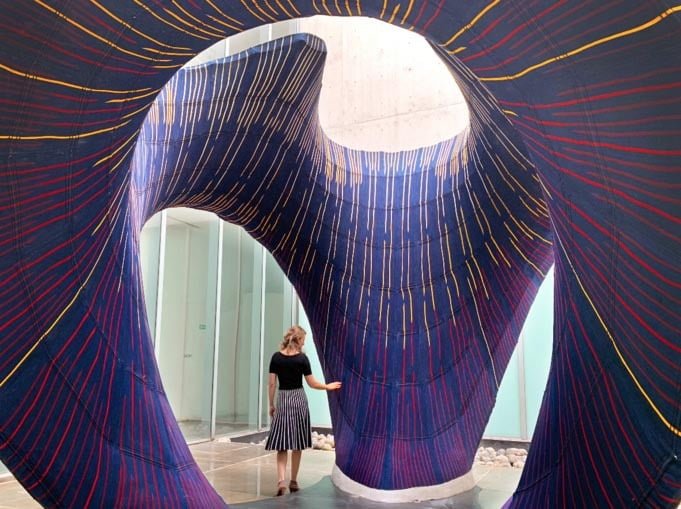 20 February 2019 Off By The Engineering Community

A knitted structure capable of supporting five tonnes of concrete? This is the insane project of the inventors behind Knitted Concrete technology.

As part of their research into digital fabrication, Mariana Popescu and Lex Reiter, both researchers at the ETH Swiss Federal Institute of Technology in Zurich, have produced a 3D textile structure using a computerised rectilinear knitting machine.

This new technology is being used on an architectural scale for the first time in a prototype being shown at an exhibition in Mexico. A five-tonne concrete structure, which has been poured onto knitted textile formwork, supported by a steel cable net. This prototype, known as KnitCandela, pays homage to Spanish-Mexican architect Félix Candela (1910-1997).

KnitCandela, a prototype of a five-tonne concrete structure, which has been poured onto knitted textile formwork.

The formwork was created from a digitally generated pattern, then knitted on a rectilinear machine. In 36 hours, the machine knits a fully shaped 3D textile consisting of four long strips.

The textile is also double layered. The first internal layer is an aesthetic surface with a colourful pattern, forming the visible ceiling within the structure. The second outer layer contains sleeves for the cables of the formwork system and pockets for balloons which, after the entire structure is coated in concrete, become hollow spaces.

There are multiple advantages to using this technology, such as saving on time, cost and materials, reduced waste, etc. The Knitted Concrete process has great potential for use in creating geometrically complex structures of this kind.

Philippe Block, Professor of Architecture and Structure at ETH Zurich, who also worked on the project, explains that the method could be a new form of 3D printing, “only it doesn’t require a completely new kind of machine. A conventional knitting machine will do just fine!”

WHAT YOU MUST KNOW BEFORE BUYING A 3D LASER SCANNER