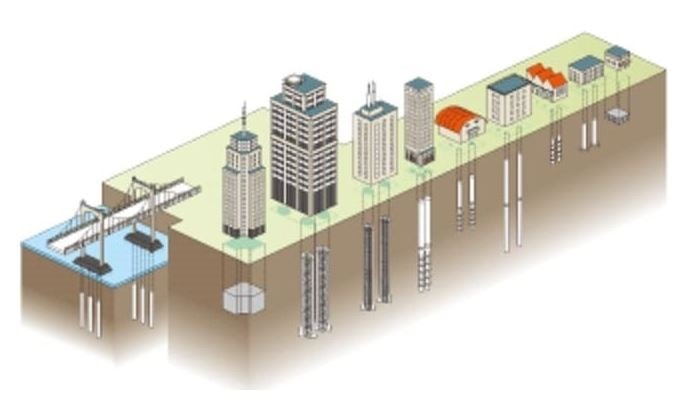 31 January 2020 Off By The Engineering Community

There are a number of foundation types available for geotechnical engineers.

Piles are used when bearing soil is at a greater depth. In such situations, the load has to be transferred to the bearing soil stratum (Fig.3).

Caissons are nothing but larger piles. Instead of a pile, a group few large caissons can be utilized. In some situations, caissons could be the best alternative (Fig.4).

In the previous situation, it is clear that a weak soil layer just below the new fill may not be enough to support the shallow foundation. Settlement in soil due to loading of the footing also needs to be computed.

If shallow foundations are not feasible, then other options need to be investigated. Mat foundations can be designed to carry large loads in the presence of weak soils. Unfortunately, cost is a major issue with mat foundations. Piles can be installed as shown in the figure ending in the bearing stratum. In this situation, one needs to be careful of the second weak layer of soil below the bearing stratum.

Due to the new load of the added fill material, weak soil layer 1 would consolidate and settle. Settling soil would drag the piles down with it. This is known as negative skin friction or down drag.

Fig.6. Punching failure (soil punching into the weak soil beneath due to pile load)