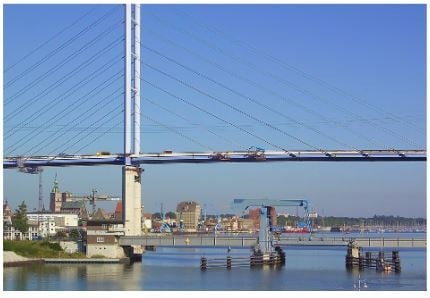 30 January 2020 Off By The Engineering Community

One of the great beneficiaries of globalization is the transport sector, especiallymaritime transport. With cost between the Far East and Europe of about$2 for aDVD player and$30 for a television set, even the longest way pays off! This hasled to an explosionlike increase of container traffic (e.g., between 2004 and 2005 inShanghai by 24%, in Dubai by 17%, and in Hamburg by 17%) .

Consequently, the number and size of container ships has increased permanently (Fig.1). 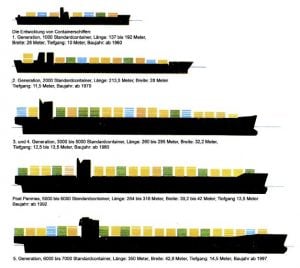 Because in many ports high-level bridges are unfeasible due to the very restricted space, movable bridges have experienced a veritable renaissance during the lastdecades. 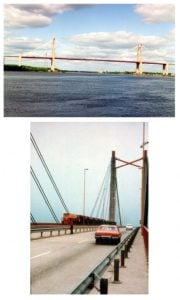 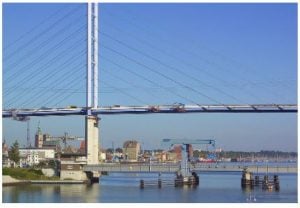 Lift bridges are suitable for great spans, but their clearance is limited by the lift towers, which have a great impact on the environment, even when the bridge is closed (Fig.4). The cables linking the bridge and the counterweights may suffer fromsignificant wear.

The lift bridge has a free span of 50 m and a clearance above the low-water level of13.5 m when in service, and 40 m when opened. The lifting height, therefore, is 26.5 m.It consists of the bridge deck, a steel bridge with orthotropic plate, and four roundedtowers made of reinforced concrete (r.c.), which hoist (and hide) the concrete coun-terweights and machinery. Due to the graceful design of these towers, the often uglyappearance of lift bridges is avoide.

Swing bridges are also suitable for great spans and do not limit the clearance. The biggest bridge of this type crosses the Suez Canal at El Ferdan, Egypt, with a free spanof about 300 m (Fig.5).

Fig.5.Swing bridge across the Suez Canal at El Ferdan, Egypt

The disadvantages of swing bridges include the following:

Bascule bridges may have a single flap or two flaps and are also adequate for longspans without limiting the clearance. The connection between the two flaps may trans-mit shear forces only, or shear forces and bending moments. For great heights above the water, the counterweight may be attached to the reararm as a pendulum (Fig.6), for reduced heights it has to be integrated with it.

Fig.6. Sample of a bascule bridge with hang-on counterweight: Bridge across the Bay of Cadiz, Spain

Drawbridges, the precursors of bascule bridges, are most probably the oldest type ofmovable bridge (Fig.7). Compared to bascule bridges, they have the advantageof rather simple piers and a high architectural potential (Fig.8), but the disadvantage that they permit only rather reduced spans.

Foundation types and selection criteria
Join us on Telegram