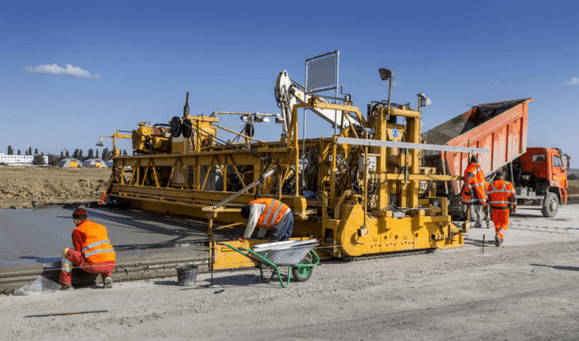 Every pavement, other than those on bridges, self-evidently includes soil. The most basic design requirement of any pavement is that the underlying soil is adequately protected from applied loads. Thus, no pavement engineer can avoid the need to understand soil. The following list features some key facts.

All this leads to one thing – uncertainty. However clever one tries to be in understanding and characterising soils, it is quite impossible to be 100% sure of the properties at a given time or in a given location.

This uncertainty makes life considerably harder. Nevertheless, it is necessary to categorise each soil type encountered in as realistic a way as possible, and there are two fundamental areas in which soil behaviour affects pavement performance. These are :

Granular material is unbound material with relatively large particle sizes, and includes natural gravel, crushed rock and granulated industrial by-products such as slag from steel production. Soils are technically granular materials, albeit often with a very small particle size (2 mm or less for clay), but the key difference is that a soil is not, in general, ‘engineered’ in any way.

A granular pavement layer, on the other hand, will be selected and quite possibly deliberately blended to give a particular combination of particle sizes. It can also be mixed with a predetermined amount of water. One would
therefore naturally expect that much of the uncertainty inherent in soil properties is removed in the case of a granular material.

However, it may still be difficult to predict performance accurately, as different material sources, most commonly different rock types, might be expected to exhibit slightly different properties due to their different
responses to crushing or their differing frictional properties.

However, the properties of granular material of interest to the pavement engineer are actually more or less the same as those of soil, namely

Nowadays, the availability of Portland cement, and substitutes such as fly ash or ground granulated blast-furnace slag, means that it can be economical to use such a binding agent to strengthen a granular material. These binders are known as ‘hydraulic’ binders, as they require the presence of water for the cementing action to take place.

Cement technology is a vast subject in its own right and involves several different chemical reactions, the most important of which are the conversion of tricalcium silicate (c. 50% of Portland cement) and dicalcium silicate (c. 25%) into hydrates (forming strong solids) by reaction with water, also generating calcium hydroxide and heat. The
first reaction is rapid; the second is slower. The reader should refer to specialist literature for details.

Hydraulically-bound materials, including so-called pavement-quality concrete (hereafter referred to as PQC) at the upper end of the strength spectrum, introduce a quite different type of behaviour and totally different design requirements. They possess a key property that is lacking in soils and granular materials, namely the ability to withstand tension.

Individual particles are rigidly bonded together by the binding agent, and a definite tensile force is required to break that bond. In the case of a strong concrete, all the large particles are well bonded into a continuous matrix of fine aggregate and cement paste, and the whole material is solid and rigid. It has a stiffness that is still partly
governed by the contacts between the large particles, but which is also heavily dependent on the qualities of the surrounding cementitious matrix.

In the case of a weaker hydraulically-bound material, the binding effect may be less complete and there may be many particle contacts that remain unbound, giving a certain freedom of movement
within the material and a reduced stiffness and strength.

Nevertheless, even a weak hydraulically-bound material will remain as a solid, with negligible permanent deformation
until the bonds are fractured, that is until the tensile strength is overcome. The key properties for the pavement engineer are, therefore

One further property that could arguably be added is fatigue resistance, that is, the resistance of the material to failure under repeated load at a stress level less than its failure strength. However, the relationship with tensile strength is so close that it is hardly a separate property.

It would also have been possible to add curing rate (the rate of strength gain), as this certainly affects the construction process and economics significantly, and thermal expansion coefficient, as this property strongly influences the tendency of a hydraulically-bound material to crack under day–night temperature variation, requiring the introduction of movement joints in concrete pavements

This is a material almost unique to pavement engineering, amaterial whose beneficial properties were discovered almost by accident, but a material which is now very much at the centre of pavement technology. There are countless stories as to when bituminous products were first used on roads, such as the accidental spillage of tar outside Derby iron works in 1901.

Although mastics including natural asphalt had been used on footways since the  1830s, they were not stable enough for roads, and it was not until around 1900–1901 that the first usages of tar-bound stone occurred at approximately similar dates in the USA and Europe. Lay (1990) gives further information.

While proportions differ around the world, typically some 90% of paved highways have a bitumen-bound surface layer; whatever the make-up beneath the surface, bitumen and bitumen-bound materials (referred to hereafter as asphalts) currently play a major role.

And asphalt is quite different from concrete or any hydraulically-bound material. Bitumen is a binding agent, like Portland cement and the other hydraulic binders, but it has very different properties. Whereas hydraulic binders create a rigid material that cannot deform appreciably unless it first cracks, bitumen remains a viscous liquid at
normal in-service temperatures. It therefore has the ability to ‘flow’.

An ability to flow may seem a rather undesirable quality in a material that is aiming to bind rock particles together, and it does indeed lead to the possibility that an asphalt can deform – hence the phenomenon known as ‘rutting’ or ‘tracking’. However, it also overcomes some of the difficulties encountered with rigid hydraulically-bound materials.

For a start, the expansion and contraction with day–night temperature variation is accommodated simply by a small viscous strain within an asphalt, meaning that no movement joints are required, and that thermally-induced cracking will only occur under the most extreme temperature conditions (continental winters, deserts).

Asphalts are also able to accommodate any moderate movement within the foundation, for example, minor differential settlement in an embankment, movement that might lead to the fracture of a rigid concrete slab. Furthermore, the tendency of asphalt to flow can be controlled by proper mixture design such that rutting is avoided.

However, despite the flexible nature of asphalt, it can still crack. It is impossible to define a tensile strength, as this will vary with temperature and rate of loading; the relevant parameter is the ‘fatigue characteristic’, defining resistance to cracking under repeated load. The key properties required for design are therefore:

The fourmaterial types introduced so far represent the basic building blocks available to the pavement engineer. However, it is worth referring here to a couple of materials that do not fit so easily into any of the four categories.The first is block paving. Blocks are often made of concrete and so could have been introduced under ‘hydraulically-bound materials’.

The second special case is a hybrid material, known in the UK as grouted macadam and in the USA as resin-modified pavement; it is also sometimes known as ‘semi-flexible’ material. This too does not fit neatly into any of the previous categories, as it combines an asphalt skeleton with a cementitious grout, filling the voids in the asphalt mixture.

It therefore utilises both bituminous and hydraulic binders. Having a two-stage production process the material tends to be expensive, and is used in particular heavyduty applications such as bus lanes and industrial pavements. As will be demonstrated later, it actually resembles an asphalt much more than a concrete, but it is nevertheless
distinct.

Block paving and grouted macadam are bulk-use materials at the expensive end of the range.
There are also specialist products that are only used in small quantities to strengthen, or in some way improve, a pavement layer.Here one could include steel reinforcement of concrete.

There are also reinforcing products designed for asphalt; some are steel, others polymeric or made of glass fibre.Asimilar range of products is available for the reinforcement of granular materials. Generically, these products are known as geogrids and their use is widespread in some areas, for example, as a means of stabilising roads over very soft ground.

Geotextiles comprise a closely related range of products, produced in various ways and forming continuous layers separating two different pavement materials (commonly the soil and a granular layer). These too can have a reinforcing function, but their most common use is simply as a separator, ensuring that fine soil particles do not migrate up into the pavement and that stones from a granular layer do not lose themselves in the soil.

The entire spectrum of geogrids and geotextiles is known under the collective name of geosynthetics and, although geosynthetics are specialist products, it is the responsibility of the pavement engineer to understand how (and  whether) they work in particular applications rather than relying solely on the, sometimes not unbiased, opinion of a supplier.