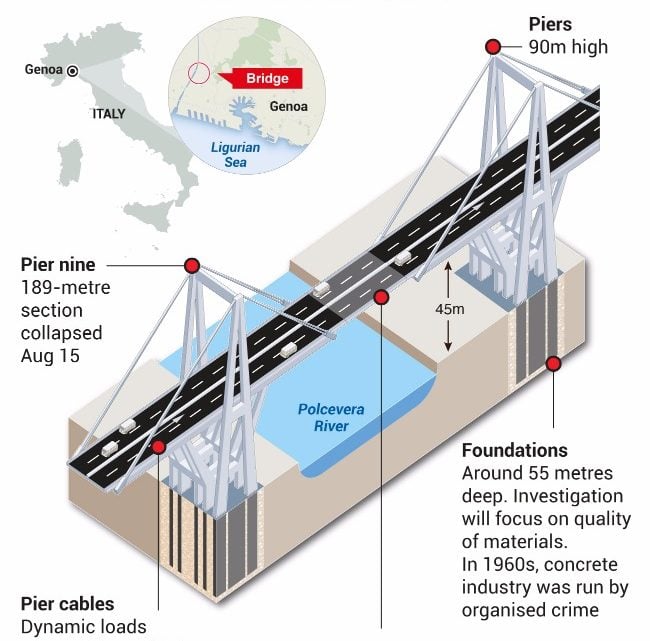 16 August 2018 Off By The Engineering Community

Photos from Google Maps taken two years the before the bridge caved in appear to show spot repairs to the concrete, but engineers said the cause of the collapse was more likely to be structural.

A photo shared on Twitter purportedly from the last few weeks also seemed to show issues with the structure — although the image is thought to be from several years ago.

The bridge underwent significant maintenance in the 1980s and 1990s as well as repair works last year and more work was being done on its foundations before the collapse.

An Italian engineering professor appeared to predict the Morandi Bridge disaster two years ago, warning that the bridge was “wrong” and had “errors” and saying it would be cheapest to simply tear it down and rebuild.

Witnesses reported seeing it hit by lightning in a storm just before it collapsed, but experts also dismissed the idea this would be behind the disaster.

Morandi is the fifth bridge to collapse in Italy in five years, according to Corriere Della Sera.

Photos of Morandi bridge before the collapse show black patches believed to be spot repairs to the concrete. Picture: Google MapsSource:Supplied

There were warnings about problems with the structure well before it crumbled. Picture: Google MapsSource:Supplied 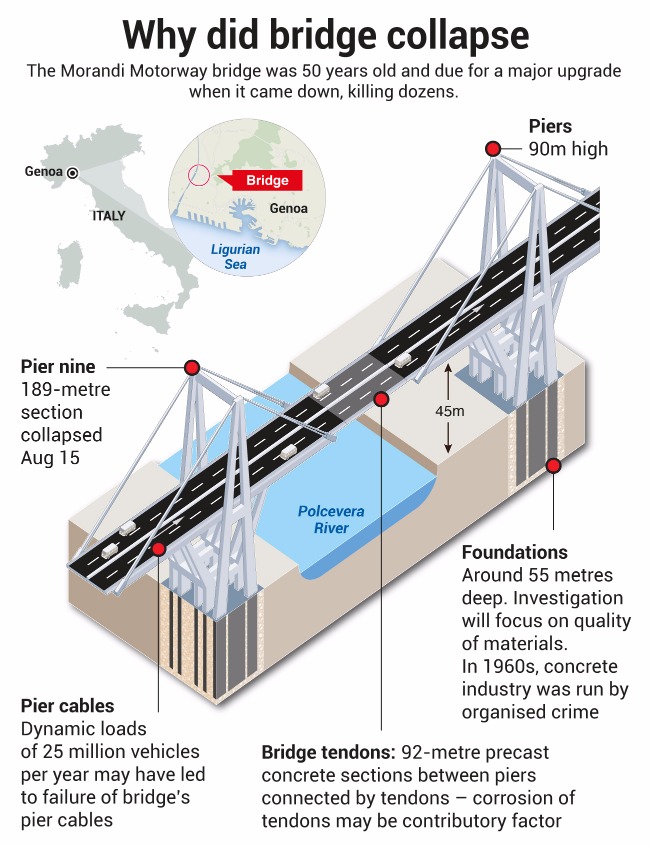 Questions have been raised as to whether the Mafia was involved in the bridge’s construction in the 1960s. “Mafia-related companies are known to have infiltrated the cement and reconstruction industries over the decades and prosecutors have accused them of doing shoddy work that cannot withstand high stress,” reported Canada’s Globe and Mail.

In December 2012, the Genoa city council discussed the state of the bridge at a public hearing and a local industry official spoke of its collapse “in 10 years”, according to the BBC.

Deputy prime minister Luigi Di Maio said the tragedy “could have been avoided” and blamed operator Autostrade per l’Italia for not carrying out maintenance. The Italian government said it intended to fine the firm $240 million and cancel its licence.

The company insisted it had monitored the bridge quarterly, as required by law.

Transport Minister Danilo Toninelli said it was “unacceptable” and that “whoever made a mistake must pay”, assuming negligence was the cause. He called on the top management of Autostrade per L’Italia to resign.

But Italian media has also pointed to Mr Tonelli’s comments two weeks ago appearing to oppose a major infrastructure project in the area that his deputy Edoardo Rixi said was fundamental.

Questions have been raised as to whether the Mafia could have been involved in the bridge’s construction in the 1960s. Picture: Luca Zennaro/ANSA via APSource:AP

The bridge on a main highway linking Italy with France collapsed during a storm, sending 45 vehicles plunging 45 metres into a heap of rubble below. Picture: Luca Zennaro/ANSA via APSource:AP

In 2016, Antonio Brencich, associate professor of civil engineering at the University of Genoa, warned it would cost more to repair the “uneven” construction, rather than just knock the bridge down.

He said maintenance costs “are so exorbitant that it would be cheaper to build a new one”.

“The Morandi Bridge is referred to as a masterpiece of engineering. In reality it is a bankruptcy,” he said in an interview with Italian TV channel primocanale.it. “That bridge is wrong. Sooner or later it will have to be replaced. I do not know when.

“But there will be a time when maintenance costs will exceed those of reconstruction, and then we will have to proceed with the replacement.”

In a statement following the incident, Italy’s motorway operator Autostrade said the bridge “dates back to the 1960s” and “maintenance works were under way to consolidate it”.

It went on to say that “a bridge-crane was installed to allow maintenance works to be carried out”, adding that “the work and status of the viaduct were subject to constant observation and supervision” by their Genoa division. 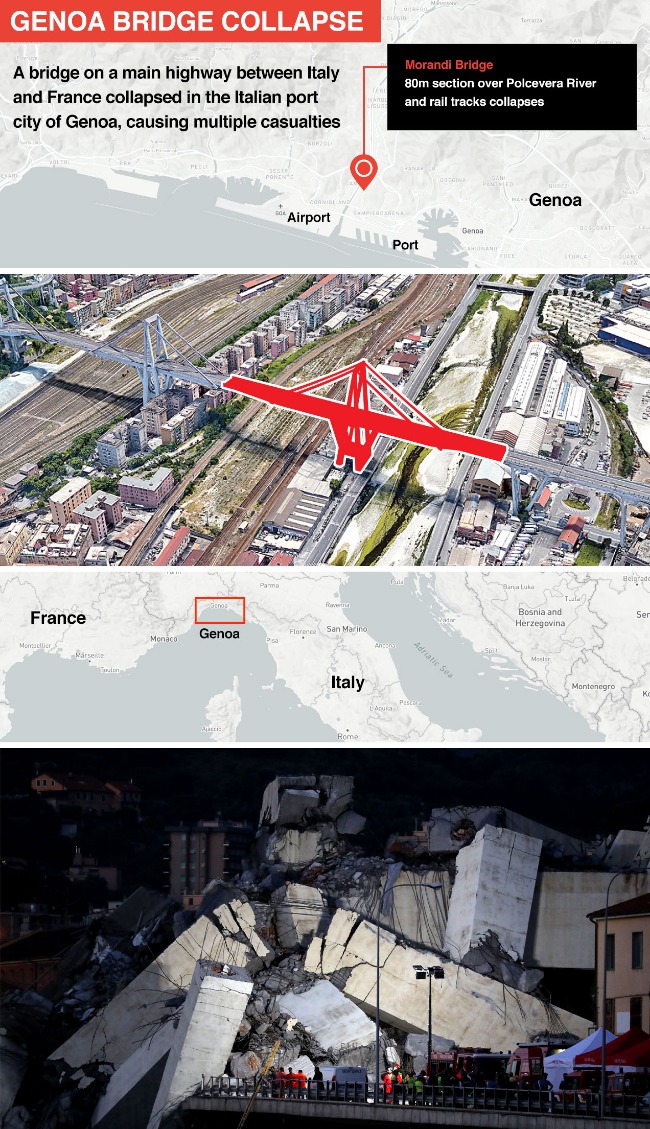 “The causes for the collapse will be the subject of an in-depth analysis as soon as it is possible to safely access the site,” the company said.

“(It’s a) very bad time with the collapsing of the bridge which was not absolutely unexpected. But we don’t know the reason,” he said.

“My role as the mayor is to make sure we have the correct infrastructure for the city and make sure that from the government we get the right amount of money in order to be able to set up the new infrastructure as soon as possible.”

Pavement Defects and Failures You Should Know!
Join us on Telegram