you are here Accueil | ENGINEERING ARTICLES | Civil Engineering Articles | Pavement Defects and Failures You Should Know! 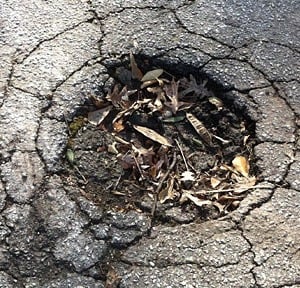 Pavement Defects and Failures You Should Know!

16 August 2018 Off By The Engineering Community

Pavement Defects and Failures You Should Know!

Pavement deterioration is the process by which distress (defects) develop in the pavement under the combined
effects of traffic loading and environmental conditions.

I. Types of pavement deterioration: b. Longitudinal cracking:
Longitudinal cracks are long cracks that run parallel to the center line of the roadway. These may be caused by frost heaving or joint failures, or they may be load induced. Understanding the cause is critical to selecting the proper repair. Multiple parallel cracks may eventually form from the initial crack. This phenomenon, known as deterioration, is usually a sign that crack repairs are not the proper solution. d. Block cracking:
Block cracking is an interconnected series of cracks that divides the pavement into irregular pieces.
This is sometimes the result of transverse and longitudinal cracks intersecting. They can also be due to lack of
compaction during construction. Low severity block cracking may be repaired by a thin wearing course. As the
cracking gets more severe, overlays and recycling may be needed. If base problems are found, reclamation or reconstruction may be needed. Figure shows medium to high severity block cracking. e.Slippage cracking:
Slippage cracks are half-moon shaped cracks with both ends pointed towards the oncoming vehicles.

They are created by the horizontal forces from traffic. They are usually a result of poor bonding between the

asphalt surface layer and the layer below .The lack of a tack coat is a prime factor in many cases. Repair requires removal of the slipped area and repaving. Be sure to use a tack coat in the new pavement. f. Reflective cracking:
Reflective cracking occurs when a pavement is overlaid with hot mix asphalt concrete and cracks reflect up through the new surface. It is called reflective cracking because it reflects the crack pattern of the pavement structure below. As expected from the name, reflective cracks are actually covered over cracks reappearing in the surface. They can be repaired in similar techniques to the other cracking noted above. Before placing any overlays or wearing courses, cracks should be properly repaired.
g. Edge cracking:
Edge cracks typically start as crescent shapes at the edge of the pavement. They will expand from the edge until they begin to resemble alligator cracking. This type of cracking results from lack of support of the shoulder due to weak material or excess moisture. They may occur in a curbed section when subsurface water causes a weakness in the pavement. At low severity the cracks may be filled. As the severity increases, patches and replacement of distressed areas may be needed. In all cases, excess moisture should be eliminated, and the shoulders rebuilt with good materials. Figure shows high severity edge cracking. Pavement deformation is the result of weakness in one or more layers of the pavement that has experienced movement after construction. The deformation may be accompanied by cracking. Surface distortions can be a
traffic hazard.
The basic types of surface deformation are:
a.Rutting
b.Corrugations
c.Shoving
d.Depressions
e.Swell
a. Rutting
Rutting is the displacement of pavement material that creates channels in the wheel path. Very severe rutting will actually hold water in the rut. Rutting is usually a failure in one or more layers in the pavement. The width of the rut is a sign of which layer has failed. A very narrow rut is usually a surface failure, while a wide one is indicative of a subgrade failure. Inadequate compaction can lead to rutting. Figure shows an example of rutting due to subgrade Failure. Minor surface rutting can be fille d with micropaving or paver-placed surface treatments. Deeper ruts may be shimmed with a truing and leveling course, with an overlay placed over the shim. If the surface asphalt is unstable, recycling of the surface may be the best option. If the problem is in the subgrade layer, reclamation or reconstruction may be needed. b. Corrugation
Corrugation is referred to as wash boarding because the pavement surface has become distorted like a washboard. The instability of the asphalt concrete surface course may be caused by too much asphalt cement, too much fine aggregate, or rounded or smooth textured coarse aggregate. Corrugations usua lly occur at places where vehicles accelerate or decelerate. Minor corrugations can be repaired with an overlay or surface milling.
Severe corrugations require a deeper milling before resurfacing.
c. Shoving
Shoving is also a form of plastic movement in the asphalt concrete surface layer that creates a localized bulging of the pavement. Locations and causes of shoving are similar to those for corrugations. Figure shows an example of shoving. Repair minor shoving by removing and replacing. For large areas, milling the surface may be required, followed by an overlay. d. Depressions
Depressions are small, localized bowl-shaped areas that may include cracking. Depressions cause
roughness, are a hazard to motorists, and allow water to collect. Depressions are typically caused by localized
consolidation or movement of the supporting layers beneath the surface course due to instability. Repair by
excavating and rebuilding the localized depressions. Reconstruction is required for extensive depressions. e. Swell
A swell is a localized upward bulge on the pavement surface. Swells are caused by an expansion of the supporting layers beneath the surface course or the subgrade. The expansion is typically caused by frost heaving or by moisture. Subgrades with highly plastic clays can swell in a manner similar to frost heaves (but usually in warmer months). Repair swells by excavating the inferior subgrade material and rebuilding the removed area.
Reconstruction may be required for extensive swelling.

The progressive breaking up of the pavement into small, loose pieces is called disintegration. If the isintegration is not repaired in its early stages, complete reconstruction of the pavement may be needed.
The two most common types of disintegration are:
a.Potholes
b.Patches
a. Potholes
Potholes are bowl-shaped holes similar to depressions. They are a progressive failure. First, small fragments of the top layer are dislodged. Over time, the distress will progress downward into the lower layers of the pavement. Potholes are often located in areas of poor drainage, as seen in Figure. Potholes are formed when the pavement disintegrates under traffic loading, due to inadequate strength in one or more layers of the pavement, usually accompanied by the presence of water. Most potholes would not occur if the root cause was repaired before development of the pothole. Repair by excavating and rebuilding. Area repairs or reconstruction may be required for extensive potholes.

b. Patches:
A patch is defined as a portion of the pavement that has been removed and replaced. Patches are usually used to
repair defects in a pavement or to cover a utility trench. Patch failure can lead to a more widespread failure of the surrounding pavement. Some people do not consider patches as a pavement defect. While this should be true for high quality patches as is done in a semipermanent patch, the throw and roll patch is just a cover. The underlying cause is still under the pothole. To repair a patch, a semi-permanent patch should be placed.
Extensive potholes may lead to area repairs or reclamation. Reconstruction is only needed if base problems are
the root source of the potholes.

Surface defects are related to problems in the surface layer. The most common types of surface distress are:
a.Ravelling
b.Bleeding
c.Polishing
d.Delamination
a. Ravelling:
Ravelling is the loss of material from the pavement surface. It is a result of insufficient adhesion between the asphalt cement and the aggregate. Initially, fine aggregate breaks loose and leaves small, rough patches in the surface of the pavement. As the disinteg ration continues, larger aggregate breaks loose, leaving rougher surfaces. Ravelling can be accelerated by traffic and freezing weather. Some ravelling in chip seals is due to improper construction technique. This can also lead to bleeding. Repair the problem with a wearing course or anoverlay. b. Bleeding:
Bleeding is defined as the presence of excess asphalt on the road surface which creates patches of asphalt
cement. Excessive asphalt cement reduces the skid-resistance of a pavement, and it can become very slippery
when wet, creating a safety hazard. This is caused by an excessively high asphalt cement content in the mix,
using an asphalt cement with too low a viscosity (too flowable), too heavy a prime or tack coat, or an improperly applied seal coat. Bleeding occurs more often in hot weather when the asphalt cement is less viscous (more flowable) and the traffic forces the asphalt to the surface. Figure 13 shows an example of bleeding during hot weather.
c. Polishing:
Polishing is the wearing of aggregate on the pavement surface due to traffic. It can result in a dangerous low friction surface. A thin wearing course will repair the surface.