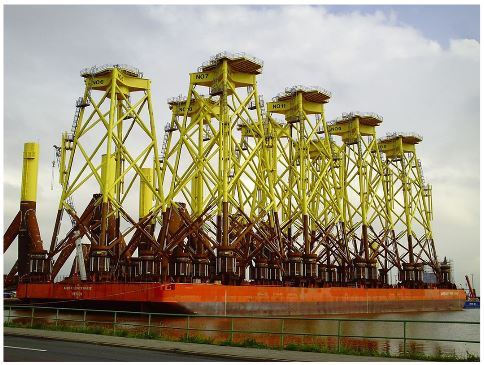 As the OWTs are located on the sea, therefore, support structure and its foundation are important for design considerations.

There are several conventional bottom-mounted support structures, which can be categorized into five basic types:

There are also hybrid support structures which use the combined features of the above categorized structures. For the first three type of supporting structures (monopole, tripod, lattice structures) pile as the foundation is usually used. Pile foundations are one of the most common forms of offshore structures; they are widely used for both offshore oil platform and OWT.

The standard method of piling method is to lift or float the structure into position and then drive the piles into the seabed using either steam or hydraulic powered hammers.

As shown Fig.1, monopole has the simple fabrication and installation.The tower of the turbine directly sits on one pile. Monopile foundations are one of the most frequently used support structure to date. Most of the offshore wind farms in shallow waters are monopole structures, which have the advantage of simple design for manufacturing. 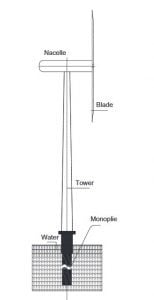 As shown in Fig.2, the turbines directly sit on a tripod or a lattice, which are supported on the pile foundations. The tower can be further stabilized by the tripod. 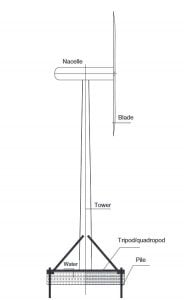 As shown in Fig.3, this type of foundation achieves its stability solely by providing sufficient dead loads by means of its own gravity. Ballast can be pumped-in sand, concrete, rock, or iron ore to add extra weight. Gravity structures are suitable for modest environmental loads such as wave load that are relatively small and dead load is significant or when additional ballast can easily be provided at a modest cost.

The gravity base structure is especially suited where the installation of the support structure cannot be performed by a heavy lift vessel or other special offshore installation vessels, either because of non availability or prohibitive costs of mobilizing the vessels to the site.

Gravity-base foundations are the second most popular sort of support structure to date. They have been used mostly to support smaller turbines in shallow waters near shore locations with a rocky seabed where the operation of piling is extremely complicated and expensive. However, for waterdepth beyond 35 m, the new generation of wind farms are needed. 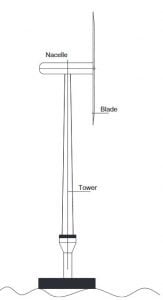 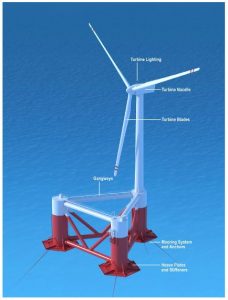 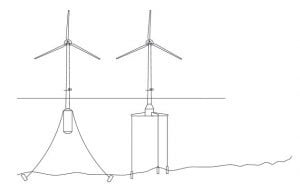 As shown in Fig.6, jacket foundation uses four-legged jackets to supportthe OWTs, which can support larger OWTs such as 6 MW turbines. Jacket foundations provide a solution for foundations in offshore wind farms in water depths of 35 m and beyond which is less risky, less expensive, and more reliable than monopiles and gravity-base foundations. 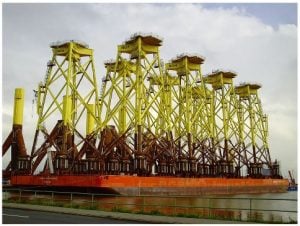 Fig.6. Steel jackets on a barge

Cladding for Tall Buildings
Join us on Telegram