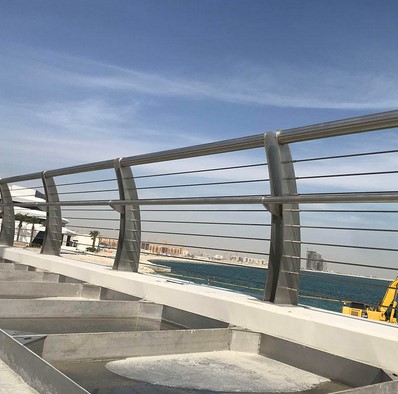 The Common Types of Bridge Railings

18 December 2021 Off By The Engineering Community

The Common Types of Bridge Railings

A bridge’s railing depends on various factors such as location, material, and purpose. The railing adds safety for pedestrians, aesthetics, and a custom touch to bridge construction.

Guardrails for bridges are located prominently to make the public stay alert and safe during their drive through bridges. These railings not only keep the traffic within the boundaries but also improve the bridge aesthetics.

The common types of railings used for bridges are:

Steel railings come in different cross-sections and designs. The most common type of steel bridge rail is a tubular rail system. These types of railings can be built alone or integrated into the concrete curb or on a low barrier wall. 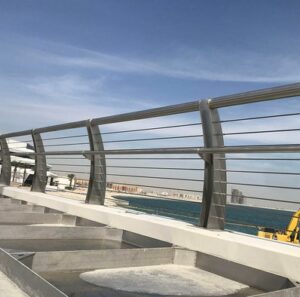 For bridges with low-vehicular traffic and for pedestrians, architectural steel railings are commonly used. Architecturally important bridges do not have a bulky and heavy design. They incorporate decorative railings without compromising pedestrian safety.

W-Beam railings are used for bridges with less traffic. As shown in the figure-2, W-Beam railings have a two-wave design and are attached to steel posts or truss girders.

W-Beam is a simple steel railing system that can be designed for higher strength.

Thrie-Beam features ‘three’ waves across its section versus ‘two’ on W-Beam and therefore provides greater rigidity, which in turn means lower deflections and higher containment that is more suitable for heavier vehicle protection.

Thrie beam rail systems can absorb the impact of out-of-control vehicles and guide them to a safer stop. These rail systems provide excellent performance and versatility.

It has an added corrugation that gives an advantage for use in transitions to bridges and along high volume, high speed roadways.

Concrete is the most common material used for bridge construction. Concrete railings are attached to the bridge’s deck slab to create a strong vehicle barrier.

A concrete railing attaches to the bridge’s deck slab and creates a powerful vehicular barrier. These sturdy railings are ideal for high traffic roadways or areas where run-off the road accidents are frequent. 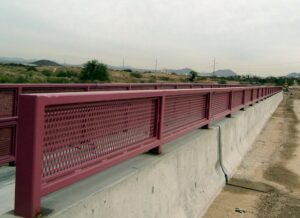 The dimensions and construction of bridge railings are dependent on the construction budget, the bridge deck material, and the mandated state specifications.