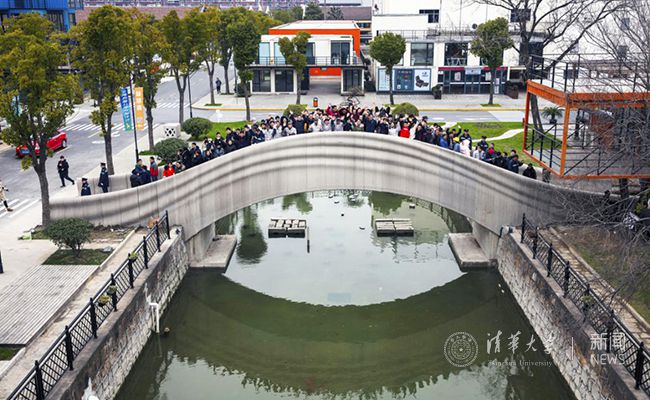 An homage to the Chinese past, the new bridge makes history in its own right.

Behold, the world’s largest 3D-printed bridge. The Chinese creation spans 26.3 meters (a little over 86 feet) and has a width of 2.6 meters (almost 12 feet). Its design is a tribute to Chinese architectural history, referencing the historic Zhaozhou Bridge built in A.D. 605, the country’s oldest standing bridge.

While the ancient Zhaozhou span required a decade to build, Professor Xu Weiguo’s team at Tsinghua University needed only 450 hours of printing to finish all of their new bridge’s concrete components. That translates to a little under 19 days. In a press statement, Professor Xu’s team also says that the bridge’s cost came in at just two thirds the tally of ordinary bridge, with savings coming from cutting down on materials and engineering.

The bridge’s print structure in an earlier stage.

Construction in a later phase, printing a bridge board.

The bridge consists of 44 individual 3D-printed concrete units, each of them approximately 3 by 3 by 5 feet. The sides, influenced by the Zhaozhou, were made with 68 individual concrete slabs moved into place by robot arms.

A low angle shot of the bridge. Its design is based on China’s storied bridge history.

Embedded with a real-time monitoring system, the bridge will be able to detect vibrating wire stress and strain with high precision. The Tsinghua press release (read through Google Translate) notes that “the demand for labor in construction projects will be increasingly in short supply” in the future. If China cannot find people to build bridges, “intelligent construction will be an important channel to solve this problem.”

The press release concedes that “there are still many bottlenecks that need to be solved in the construction of 3D concrete printing,” including that while many companies are invested in building the technology, it has not often been used in “actual engineering.”

Before the bridge was built, a 1:4 model was created to test its strength. When that went off without a hitch, the team felt confident enough to proceed in its next goal.

There have been other 3D-printed architectural projects over the last few years, as the technology has become more widespread. A team at MIT built a sample house in a stunning 14 hours. Not that they’re known for comfort, but the Marines recently 3D-printed a barracksin 40 hours. If there are ever houses on Mars, NASA suspects they, too, will be built by robots using 3D printing.

The Benefits of Understanding your Track Geometry Measurements

Top 10 Fastest Trains in the World
Join us on Telegram