you are here Accueil | ENGINEERING ARTICLES | Civil Engineering Articles | Construction | What Is Grasscrete? Types of Grasscrete 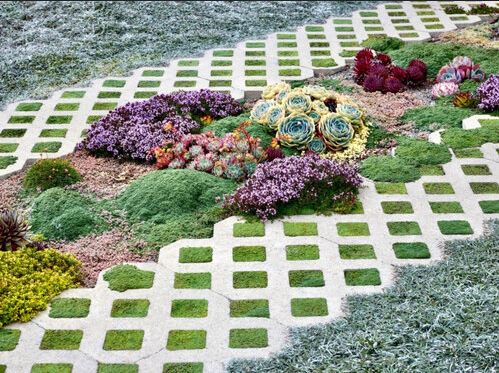 17 December 2021 Off By The Engineering Community

Grasscrete is manufactured by a simple process by pouring concrete over styrene void formers. It is thus a cast on site cellular reinforced concrete system with void created by formers.

Former is fundamentally equipment or a mould that forms voids in the concrete, which can be filled later with a variety of porous materials such as stone, gravel or vegetation.

Grasscrete is one of the pavements methods where instead of the plain paving surface, vegetation or grass is grown on the surface, which gives an appealing look to pavements or driveways.

Grasscrete consists of a reinforced cellular cast on-site concrete on that one can grow natural grass by filling those voids with either soil or stones. These voids are created with the help of plastic formers (generally called moulds).

This type of pavement is widely adopted in major cities and modern designs because of its aesthetically appealing and environmentally favorable.

As the name suggests, in stone-filled grasscrete instead of soil, crushed stones are filled between the concrete. These crushed stones’ size comes in a range of 1/2 inches to 3/4 inches. 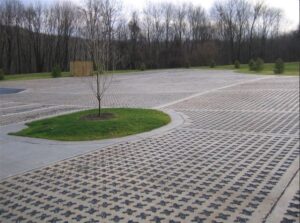 Generally, the draining capacity of stone-filled grasscrete rates up to 480 inches per hour with 100% water retention. The main reason to consider this one is that it is considered a low-maintenance design, and it is best suited for traffic sustained areas and provides max percolation rates.

This type of Grasscrete is ideal if you are looking for considerably a low maintenance design. Stone filled Grasscrete is perfect for sustained traffic areas. Furthermore, it provides maximum percolation rates. It is both functional and environment friendly.

In this type of grasscrete, the vegetation or the grass is placed parallel to the concrete. Usually, concrete with a thickness of 51/2″ is provided along with a half-inch space to protect the root alongside the vegetation. 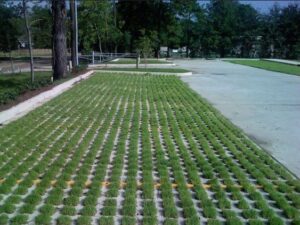 Partially concealed grasscrete is eco-friendly and pleasing in appearance. It is most suited for sustained traffic areas.

In concealed grasscrete, a layer of soil with linch thickness is laid on the concrete. While the concert below has a depth of five and a half inches.

The vegetation or the grass laid on the soil surface. These types of grasscrete are best suited for low-traffic areas.

There are various advantages, including Economical, Structural, and Environmental benefits.

Grasscrete has a longer lifecycle in comparison to the other conventional impervious paving systems. In fact, Grasscrete has installations that go back in time as far as 1974 that is still in place today.

One of the unique properties of Grasscrete is that, it allows natural water infiltration. And it is also established that treating stormwater is not a practical solution but is also regulated by a number of agencies. Thus, the need for expensive stormwater infrastructure such as curbs, gutters and underground piping can be reduced or even eliminated in some cases.

The most viable option associated with low maintenance cost is the stone filled Grasscrete. It is also the most widely used Grasscrete. Clogging of the voids in areas having slope less than 1% is not typical although, these voids can be cleaned out easily.

Heat islands are nothing but the built up areas that are hotter than the nearby rural areas. The visually appealing green space/vegetation reduces the heat Island effect, thereby creating a comfortable, attractive and a calming parking area for the use of vehicles. This is how Grasscrete allows a barren vehicular area transform into a green urban oasis.

The use of recycled material is encouraged in Grasscrete right from the manufacturing process of the concrete mix to fill the voids and the sub base layers. Grasscrete maintains its environmental focus by utilizing the recycled materials to its 100% capacity.

Grasscrete not only maintains the natural equilibrium of the groundwater recharge but also significantly reduces the runoff. Infiltration of the stormwater in Grasscrete is at about the same rate as any other ordinary lawn located in the same area.

The Best Alternatives to Concrete In Construction
Join us on Telegram