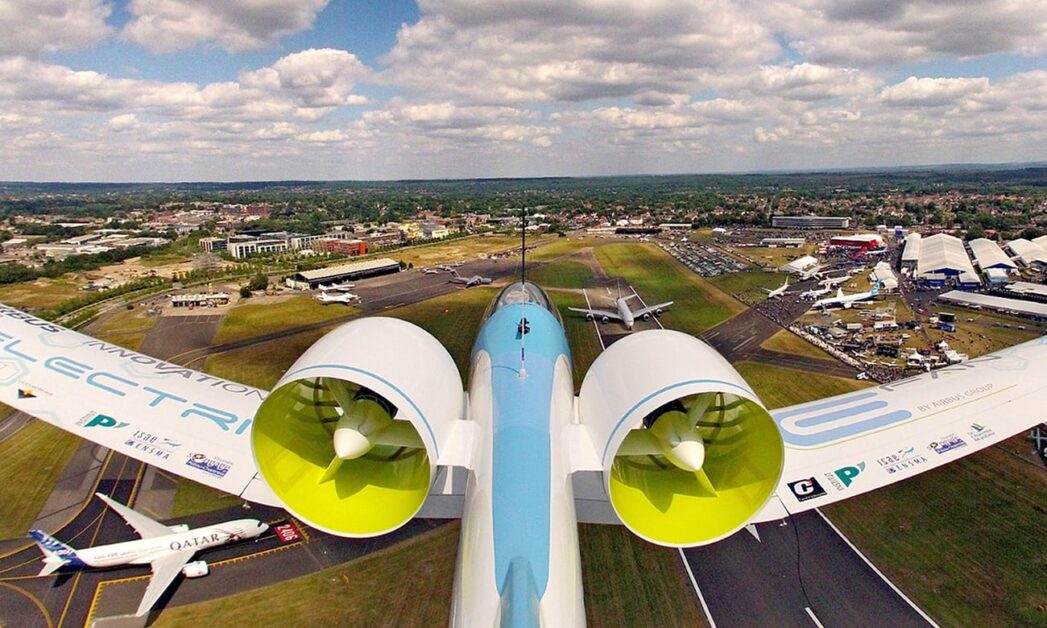 28 December 2017 Off By The Engineering Community

Trains, ships and automobiles have all been swept along in recent years by the electric power revolution – and planes are next.

Passenger jets are poised for an electric makeover that could fundamentally change the economics and environmental outlook of the aviation industry. Up until now the fact that the necessary batteries weigh two tonnes each has limited the switch from fossil fuels to a totally electric-powered future.

However, last month a consortium comprising Airbus, Rolls-Royce and Siemens said they had found a way to use hybrid electric jet engines to conquer gravity. They are converting a regional jet into a demonstration plane, called the E-Fan X, which will be ready by 2020.

Paul Stein, chief technology officer at Rolls-Royce, said: “It is a two-tonne battery pack – the batteries are still fairly heavy. Beating gravity into submission is a huge challenge, so weight is a big issue.”

The BAE 146 demo aircraft, a jet that seats up to 100 people, will at first have one of its four gas turbine engines replaced with the hybrid engine. This engine will be powered by batteries and an onboard generator using jet fuel. If successful, the team will then move to two electric engines. Siemens is designing the 2MW electric motor, Rolls is building the generator that powers the engine and Airbus will integrate the system into the plane and link it to flight controls. They are developing the hybrid motor because fully electric commercial flights are currently out of reach.

Pound for pound, fossil fuels contain around 100 times as much energy as a lithium-ion battery, the most common electric power pack at present. In a car, which has its wheels planted firmly on the ground, engineering boffins can design a vehicle to offset that weight disadvantage.

But in a machine that must lift itself off the ground and propel upwards this is a much harder problem to solve.

This tricky dilemma is a challenge that has been embraced with renewed gusto in the aviation sector. “Aviation has always eluded electrification largely because of the size and weight of components involved,” Stein said. “But technology has moved on apace. Electrification is now poised to make a significant impact.”

Stein said three classes of aviation are potentially within reach of an electric engine revolution. “The smallest is air taxis, which can take 1 to 4 people up to 75 miles. For small air taxis, the battery technology is almost ready now,” he said.

Some of these air taxis look like flying cars, such as those backed by Larry Page, one of Google’s founders. Chinese-owned Terrafugia’s “roadable aircraft” drives like a typical car on the ground and fits in a standard single-car garage and can be pre-ordered for $300,000 (£224,000). Pipistrel, a Slovenian company, already makes a two-seater electric training plane. Airbus has also developed a two-seater, the E Fan, which flew across the Channel in 2015.

The second market is the small, regional jet that can carry between 10 and 100 passengers. “Our target end game is a fixed wing, regional hybrid design,” Stein said of the E-Fan X project. The third market – the short-haul commercial market, dominated by Airbus’s A320 and Boeing’s 737 – is still some way off.

Bjorn Fehrm, an aeronautical analyst at aviation Leeham News and Comment, said: “For ultra short range, it can be fully electric. For the range of today’s thousands of single aisle [A320, 737] planes, it will have to be hybrid for at least another 30 years. For long range, it’s unrealistic. There would have to be a breakthrough in fuel cells, or similar.”

Airlines are watching the evolution of electric battery technology with interest. EasyJet wants electric planes to fly passengers on its short-haul routes within 10 to 20 years. It has signed a deal with Wright Electric, a US engineering company, to develop electric-powered aircraft that could reach Paris and Amsterdam from London.

The attractions for airlines are clear; depending on the oil price, jet fuel had accounted for between 17% and 36% of their running costs over the last few years. Stein reckons the E-Fan X could produce fuel savings of 15%.

The rush to electric battery technology in the automobile sector and a renewed push by aviation is likely to lead to scientific breakthroughs in what is possible over the coming years. Samsung Electronics recently declared it increased the energy capacity of a lithium-ion battery by 45%, and decreased the time needed for a recharge, by incorporating graphene – an ultra-thin form of carbon – into the power pack. Lithium-ion battery chemistry is notoriously unstable, prone to overheating and catching fire – not ideal when cruising at 35,000 feet.

“For us, safety is paramount. The burden of proof to ensure we maintain that safety margin is very high,” Stein said. “We cannot have a battery chemistry that risks a fire.”

So, lots of big hitters are ploughing huge investment and brain-power into developing alternative battery chemistries. One promising option is a solid-state lithium battery, which replaces the liquid electrolyte of current cells with a solid substitute. Such batteries offer much higher energy densities and should also be cheap to mass produce. Huge riches await those that can crack the problem and produce a next generation power source that is cheaper and greener.

Engineering with the Spreadsheets by ASCE

Method Statement Template for Civil Work
Join us on Telegram