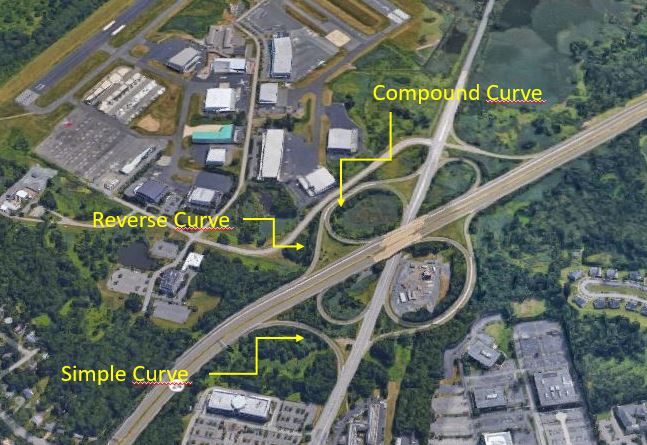 The horizontal alignment dictates the left or right turning required to remain on the roadway, while the vertical alignment exerts forces on the vehicle as the grade along the roadway changes.

In the horizontal perspective, a roadway is primarily comprised of tangent, or straight, sections which are smoothly connected by curves.

The horizontal curves that are used to provide drivers with the transition from one tangent to the next tangent are typically simple curves which are an arc of circle.

These curves have a single radius value which represents the sharpness or flatness of the curve. 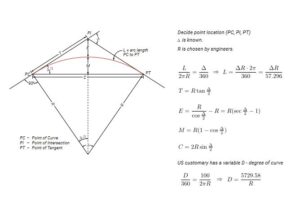 A tangent roadway section has an infinite radius, since it is a straight line and a horizontal curve has a single, finite radius. Therefore, a spiral transition is used in some instances to help make the shift from a tangent to a curve a little smoother.

Geometric relationships and equations can be used to find important information for reach curve. This information includes the radius, the length of the curve, the change in direction of the two tangents, and other factors depending on our needs.

Horizontal curves are of different types as follows: 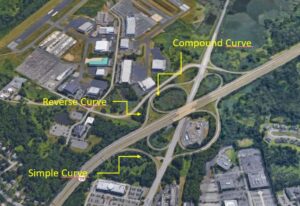 Compound curve is a combination of two or more simple circular curves with different radii. In this case both or all the curves lie on the same side of the common tangent.

Reverse curve is generated when two simple circular curves bending in opposite directions are meet at a signle point and that points is called as point of reverse curvature. The center of both the curves lie on the opposite sides of the common tangent such that the radii of both the curves may be same or different. 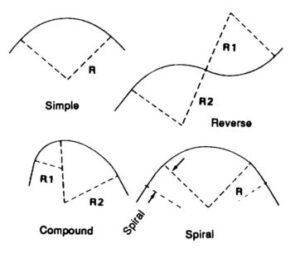 A curve of variying radius is termed as transition curve. It is generally provided on the sides of circular curve or between the tangent and circular curve and between two curves of compound curve or reverse curve etc. Its radius varies from infinity to the radius of provided for the circular curve.

Transition curve helps gradual introduction of centrifugal force by gradual super elevation which provides comfort for the passengers in the vehicle without sudden jerking.

Spiral is a type of transition curve which is recommended by Indian Road Congress as ideal transition curve because of its smooth introduction of centrifugal acceleration. It is also called as clothoid. 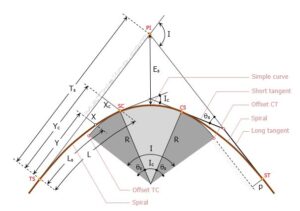 In this curve, the radius decreases as the length increases and this causes the radial acceleration to keep on falling. The fall is, however, not uniform beyond a 30 o deflection angle. This curve is not used on railways.

In the vertical perspective, a roadway is also comprised of tangents which are smoothly connected by curves. For vertical alignment, the tangents represent grades which can either be flat, uphill or downhill.

The typical vertical curve is a symmetric, parabolic curve whose shape is defined by the parabolic equation.

The information required to fully define a vertical curve is the elevation of the beginning of the curve, the grades of the two tangents that are connected ad the length of the curve.

The naming convention of vertical alignment is similar to horizontal alignment. Several points of interest along the curve include that the location where the tangents intersect, which is known as the Point of Vertical Intersection.

The location where the vehicle leaves the tangent grade and begin to drive along the curve, is known as the point of vertical curvature.

The point where the curve ends and the vehicle returns back to the tangent grade is known as the Point of Vertical Tangency.

In general parabolic curve is preferred as vertical curve in the vertical alignment of roadway for the ease of movement of vehicles. But based on the convexity of curve vertical curves are divided into two types

Valley curve connects falling gradient with rising gradient so, in this case convexity of curve is generally downwards. It is also called as sag curve.

They are formed when two gradients meet as any of the following four ways:

Summit curve connects rising gradient with falling gradient hence, the curve has its convexity upwards. It is also called as crest curve.

They are formed when two gradients meet as in any of the following four ways: