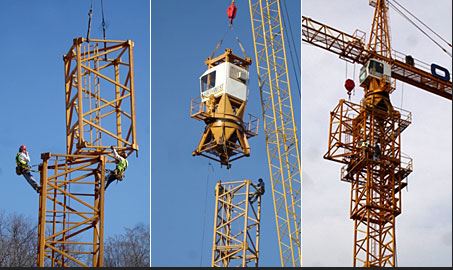 26 June 2021 Off By The Engineering Community

When it comes to building skyscrapers, there is no piece of construction equipment more essential than the tower crane. These heavy lifting machines dominate city skylines, hoisting materials and machinery to some of the highest construction sites on Earth.

They have become a part everyday life in almost every major city as contractors race to build high-rise after high-rise, and more than 100 000 can be found in operation around the world at any given time.

Despite how common tower cranes are, they often seem to appear in the sky out of nowhere leaving many of us wondering how they got there in the first place.

The vast majority are erected using mobile cranes that are larger in size, but obviously this cannot always be done when you are building a record-breaking structure and taller cranes simply don’t exist.

Some construction sites in dense urban areas may not have enough space for a large mobile crane either, and many projects also require tower cranes to be erected in stages so that they rise in unison with the constructer portion of the building.

In these scenarios, the cranes must raise themselves to the final working height all on their own using a method known as climbing, and that is what we will be looking at in this post.

In general terms, climbing a tower crane simply refers to the process of adding or removing sections of the mast in order to increase or decrease the overall height.

The concept is fairly straightforward in principle, but it is quite difficult to execute safely in the field with catastrophic consequences if anything should go wrong. It is one of the most dangerous operations that can be performed with a tower crane, and it is only carried out when absolutely necessary to complete a project.

Before climbing can begin, a tower crane must first be erected to an initial height using a suitable mobile crane.

The process begins by constructing a stable foundation, which usually consists of a large concrete slab reinforced with steel rebar, and this takes place about a month before the crane goes vertical so that concrete has enough time to cure.

Once the concrete has reached its full strength, the first steel truss section of the mast is lifted into place, and it is secured with anchor bolts that are embedded in the foundation. Additional sections are then stacked on top of one another to complete the tower portion of the crane, and they are fastened together with high-strength steel bolts.

The mast is topped off with a slewing unit, which is basically a turntable that allows the top of the crane to rotate, and this serves as base for the operator’s cab and lifting components.

The exact arrangement of the top assembly varies depending on the type of tower crane, but the one shown here has a hammerhead configuration with a cathead and a fixed jib that cannot be moved up or down.

The cathead is the first component to be installed on top of the slewing unit, followed by the counter jib and working jib, and these are connected with steel tie rods that help to transfer loads to the mast.

Once the top assembly is complete, a counterweight is then added to the counter jib, which normally consists of several concrete slabs.

The counterweight helps to balance the load when the crane is performing a lift, effectively reducing the bending moment, or torque, that must be carried by the mast.

In either case, the ability to change the position of the load makes it possible to perfectly balance the crane on top of the mast, and this is essential for the climbing process to be carried out safely.

When a tower crane is ready to be climbed, a steel climbing frame is first assembled around the base of the tower, and it is lifted up to the underside of the slewing unit. The frame has a square cross-section with a lattice structure around three sides, but the front is left open so that new mast sections can pass through.

The top is securely fastened to the underside of the slewing unit with high-strength steel bolts, and a hydraulic jack at the bottom is positioned over a push point on the existing mast.

A new mast section is then hoisted up to the frame, where it is either placed on a steel tray or suspended from a guide rail that extends out above the opening. At this point, the top of the crane must be perfectly balanced over the jack before it can be lifted, which is accomplished by placing a weight on the hook to offset the counterweights.

An additional mast section is typically used for this, and it is positioned at a precise radius from the mast so that there is no net moment applied onto the climbing frame.

The crane top essentially behaves like a large balance scale during the climb, and it could topple off the mast if its center of gravity is not in line with the jack. In addition, the climbing frame is not designed to carry significant torsion, and it is extremely important that the crane is not slewed during the climbing process.

The new mast sections are therefore arranged in a straight line on the ground to eliminate any need to rotate the crane, and the operator will usually leave the cabin during the climb so that the crane cannot be slewed accidentally.

Once the crane is confirmed to be in balance and all safety checks have cleared, the hydraulic cylinder is then pressurized to take the weight of the crane top, and the slewing unit is unbolted from the top of the mast.

The cylinder is used to lift the climbing frame along with the top of the crane until there is enough clearance to insert a new mast section, which usually requires several strokes depending on the cylinder’s length.

The mast section can then be maneuvered inside the frame, where it is bolted to the underside of the slewing unit, and the hydraulic cylinder is depressurized so that the bottom of the new section engages with the top of the existing mast.

After the joints are securely fastened, the cylinder is retracted and repositioned on the next push point, and the whole cycle can repeat until the crane reaches the desired height.

One the process is complete, the climbing frame will either be lowered down the mast or removed entirely until it is needed to raise the crane higher or to bring it back down at the end of construction.

What is a Highway Impact Attenuator?
Join us on Telegram