you are here Accueil | PROJECT MANAGEMENT | Resources and Topics | What is a public-private partnership? Definition and meaning 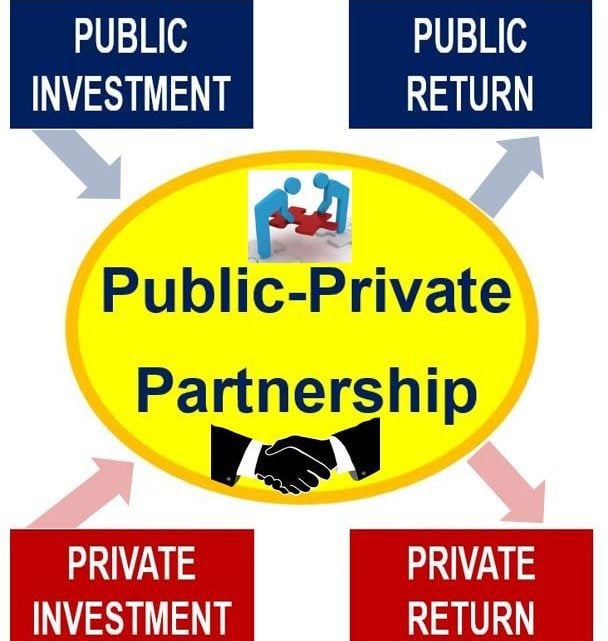 6 November 2018 Off By The Engineering Community

A public-private partnership, also called a PPP, P3 or 3P, is a long-term cooperative agreement between a private company and the national or local government.

Public-private partnership arrangements have existed throughout history, but have become significantly more popular across the globe since the 1980s as governments attempt to obtain some benefits from the private sector without having to make the full privatization jump. In a PPP arrangement, private companies carry out aspects of government work.

According to the World Bank Group, public-private partnerships do not usually include turnkey construction or service contracts – these are classed as public procurement projects, or privatization of utilities where the public sector still has a limited ongoing role.

The PPP Knowledge Lab says the following regarding PPPs:

“A public-private partnership (PPP) is a long-term contract between a private party and a government entity, for providing a public asset or service, in which the private party bears significant risk and management responsibility, and remuneration is linked to performance.”

When the government is short of funds for a much-needed project, a public-private partnership, which benefits from an injection of money from the private sector, is a promising option.

The PPP Knowledge Lab adds that a private-public partnership encompasses several different types of contracts – there is not a standard, internationally-recognized definition of PPP. Different jurisdictions how their own unique terminologies to describe similar projects.

A growing number of nations are enshrining a definition of public-private partnerships in their laws.

Public-private partnership – the best ones

Governments have seen the greatest gains when the public-private partnership arrangements occurred as a result of competitive bidding.

When the private company’s main contribution has been to raise finance, governments have not fared so well. This is because governments can generally borrow money at cheaper rates than private entities can.

According to gov.uk, the United Kingdom was the first nation in the world to develop the concept of public-private partnership arrangements for public service projects. (Image: Adapted from gov.uk)

Critics say that governments only ask private companies to raise money when they do not want their public borrowing figures to rise.

In the majority of PPP cases, the private entity bears considerable risk and management responsibility, with remuneration (how much they are paid) linked to performance.

What isn’t a PPP?

In countries whose civil laws follow the tradition of the Code Napoleon, there is a difference between public contracts such as concessions and PPPs where the private company is delivering a service to the government in the form of bulk supply, such as a BOT (Build-Operate-Transfer) project for a water treatment plant, or the management of hospital facilities or other existing facilities for a fee.

In other jurisdictions, some specific sectors are excluded from the PPP definition, especially those sectors where there is an extensive private sector initiative or where extensive regulations exist.

In some nations, arrangements involving more limited risk transfer, including management contracts, are excluded from the PPP definition for institutional reasons. In such cases, the public authorities prefer to call them traditional procurement processes for goods and services. PPP Legislation and Laws has a summary of some sample laws.

Since 2008 – the onset of the global financial crisis – the EU estimates that PPP deals in the trading bloc have declined by over 40%.

According to a European Commission bulletin on PPPs, investments in public sector infrastructure are viewed as an important means of maintaining or boosting economic activity.

The European PPP Expertise Centre (EPEC) was set up to support public-sector capacity to implement public-private partnerships and share timely solutions to problems common across the EU in PPPs.

A 2007 survey found that two primary reasons for PPPs were expressed by US city managers:

In a follow-up survey – Collaborative Service Delivery: What Every Local Government Manager Should Know -carried out in 2012, interest had shifted – the respondents believed that collaborative service delivery was ‘the right thing to do’ (86%) – other motivations in that survey included the need for leveraging resources (84%), better outcomes (81%), relationship building (77%), and better processes (69%).

Among the 2012-survey respondents, the provision of public services and utilities through contracts with private entities reached 18% – the peak – in 1977, and has since declined.

Twenty-two percent of local governments in the 2012 survey said they had brought back in-house one or more services that they had previously provided for their citizens through PPP arrangements.

A frequently-mentioned problem with PPP arrangements was that private investors obtained a **rate of return that was greater than the government’s bond rate, even though all or most of the income risk related to the project was borne by the public sector partner.

** Rate of return is the ratio of an investment’s income over its initial cost.

In a PriceWaterHouse (PWC) report – Hanging in the Balance Sheet? – published in 2008, the authors argued that it was not fair to compare the private and public borrowing rates, because of the ‘constraints in public borrowing’, which could imply that public borrowing was excessively high, so PPP projects might be beneficial by keeping the government books free of additional debt.

Several Australian studies of early initiatives to promote PPPs in infrastructure concluded that, in the majority of cases, those proposed schemes were inferior to the standard public procurement model based on competitively tendering construction of publicly-owned assets.

A response to these negative conclusions was the development of formal procedures that focused on PPPs ‘value for money’, instead of reductions in debt.

Value for money, for example, was achieved by arranging an appropriate allocation of risk. From the late 1990s onward, private finance initiatives in Australia had these assessment procedures included in the contracts.

Another model under discussion and of particular interest to developing countries, is the PPCP (public-private community partnership), in which both players – the government and private sector entities – work together for social welfare, thus eliminating the main focus of the private sector partner on profit.