you are here Accueil | ENGINEERING ARTICLES | Civil Engineering Articles | GEOTECHNICAL | What is vibro-compaction? 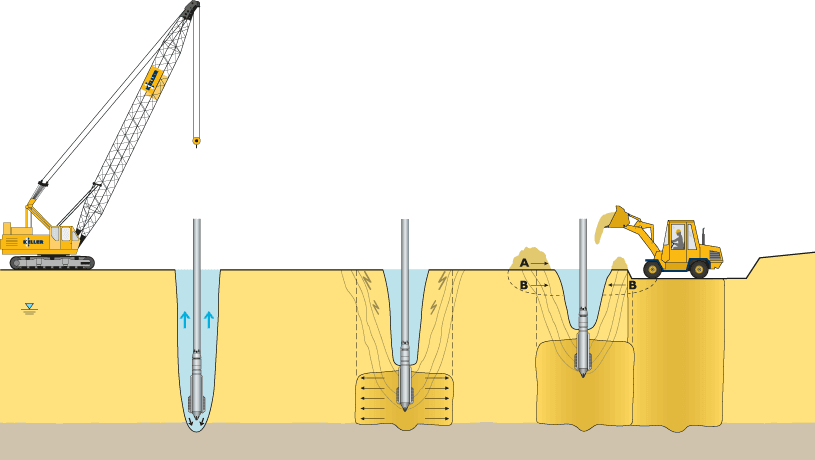 3 February 2019 Off By The Engineering Community

The vibrating probe densifies loose granular, cohesionless soils by using mechanical vibrations and, in some applications, water saturation to minimize the effective stresses between the soil grains which then allows the oil grains to rearrange under the action of gravity into a denser state.

Two rigs completing vibro compaction for liquefaction mitigation and settlement at a casino.

As an alternative to deep foundations, vibro-compaction is usually more economical and often results in significant time savings. Loads can be spread from the footing elevation, thus minimizing problems from lower, weak layers. Densifying the soils with vibro-compaction can considerably reduce the risk of seismically induced liquefaction. Vibro-compaction can also be cost-effective alternative to removal and replacement of poor load-bearing soils. The use of vibro-compaction allows the maximum improvement of granular soils to depths of up to 165 feet. The vibro-ompaction system is effective both above and below the natural water level.

Vibro-compaction is effective only in granular, cohesionless soils. The realignment of the sand grains and, therefore, proper densification generally cannot be achieved when the granular soil contains more than 12 to 15 percent silt or more than 2 percent clay. The maximum depth of treatment is typically limited to 165 feet, but there are very few construction projects that will require densification to a greater depth.

Like all ground improvement techniques, a thorough soils investigation program is required. Yet, a more detailed soils analysis may be required for vibro-compaction than for a deep foundation design because the vibro-compaction process utilizes the permeability and properties of the in-situ soil to the full depth of treatment to achieve the end result. A comprehensive understanding of the total soil profile is therefore necessary which typically requires continuous sampling or in-situ testing.

Equipment access over the site must also be considered. Since the operation requires use of a large crane, a relatively flat work bench with a width of at least 25 ft must be possible near all areas to be treated.

What are stone columns ?
Join us on Telegram