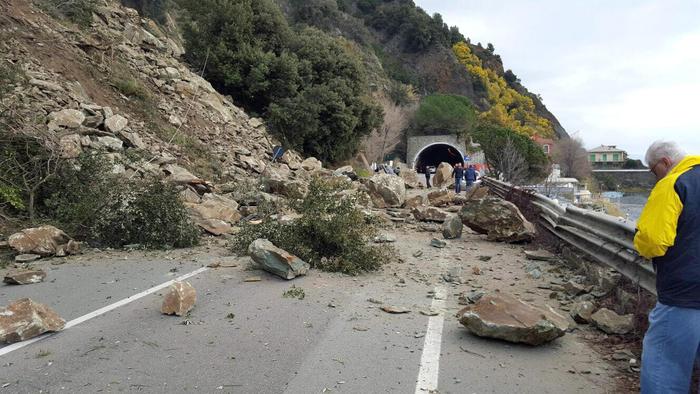 What is a landslide?

A landslide is defined as the movement of a mass of rock, debris, or earth down a slope due to gravity. The materials may move by falling, toppling, sliding, spreading, or flowing. What causes a landslide?

Almost every landslide has multiple causes. Slope movement occurs when forces acting down-slope (mainly due to gravity) exceed the strength of the earth materials that compose the slope. Landslides can be triggered by rainfall, snowmelt, changes in water level, stream erosion, changes in ground water, earthquakes, volcanic activity, disturbance by human activities, or any combination of these factors. What are submarine landslides?

Where do landslides occur?

How fast do landslide travel?

Landslides can move slowly, (millimeters per year) or can move quickly and disastrously, as is the case with debris flows. Debris flows can travel down a hillside at speeds up to 200 miles per hour (more commonly, 30 – 50 miles per hour), depending on the slope angle, water content, volume of debris, and type of earth and debris in the flow. These flows are initiated by heavy periods of rainfall, but sometimes can happen as a result of short bursts of concentrated rainfall or other factors in susceptible areas. Burned areas charred by wildfires are particularly susceptible to debris flows, given certain soil characteristics and slope conditions. Why study landslides?
Landslides are a serious geologic hazard. It is estimated that in the United States they cause in excess of $1 billion in damages and from about 25 to 50 deaths each year. Globally, landslides cause billions of dollars in damages and thousands of deaths and injuries each year. Who is most at risk for landslides?

As people move into new areas of hilly or mountainous terrain, it is important to understand the nature of their potential exposure to landslide hazards, and how cities, towns, and counties can plan for land-use, engineering of new construction and infrastructure, and other measures which will reduce the costs of living with landslides. Although the physical causes of many landslides cannot be removed, geologic investigations, good engineering practices, and effective enforcement of land-use management regulations can reduce landslide hazards. Do human activities cause landslides?

Yes, in some cases human activities can be a contributing factor in causing landslides. Many human-caused landslides can be avoided or mitigated. They are commonly a result of building roads and structures without adequate grading of slopes, of poorly planned alteration of drainage patterns, and of disturbing old landslides. Where can I find landslide information for my area?

The USGS National Landslide Information Center (NLIC) is a part of the U.S. Geological Survey Landslide Hazards Program that collects and distributes all forms of information related to landslides. The NLIC is designed to serve landslide researchers, geotechnical practitioners engaged in landslide stabilization, and anyone else concerned in any way with landslide education, hazard, safety, and mitigation. Every state in the US has a geoscience agency and most have some landslide information. The Association of American State Geologists provides links to the State Geologist for every state.

What was the most expensive landslide to fix in the United States?

The Thistle, Utah, landslide cost in excess of $200 million dollars to fix. The landslide occurred during the spring of 1983, when unseasonably warm weather caused rapid snowmelt to saturate the slope. The landslide destroyed the railroad tracks of the Denver and Rio Grande Western Railway Company, and the adjacent Highway 89. It also flowed across the Spanish Fork River, forming a dam. The impounded river water inundated the small town of Thistle. The inhabitants of the town of Thistle, directly upstream from the landslide, were evacuated as the lake began to flood the town, and within a day the town was completely covered with water. Populations downstream from the dam were at risk because of the possible overtopping of the landslide by the lake. This could cause a catastrophic outburst of the dam with a massive flood downstream. Eventually, a drain system was engineered to drain the lake and avert the potential disaster. How many deaths result from landslides?

An average of between 25 and 50 people are killed by landslides each year in the United States. The worldwide death toll per year due to landslides is in the thousands. Most landslide fatalities are from rock fall, debris-flows, or volcanic debris flows. What should I know about wildfires and debris flows?

Wild land fires are inevitable in the western United States. Expansion of human development into forested areas has created a situation where wildfires can adversely affect lives and property, as can the flooding and landslides that occur in the aftermath of the fires. There is a need to develop tools and methods to identify and quantify the potential hazards posed by landslides produced from burned watersheds. Post-fire landslide hazards include fast-moving, highly destructive debris flows that can occur in the years immediately after wildfires in response to high intensity rainfall events, and those flows that are generated over longer time periods accompanied by root decay and loss of soil strength. Post-fire debris flows are particularly hazardous because they can occur with little warning, can exert great impulsive loads on objects in their paths, and can strip vegetation, block drainage ways, damage structures, and endanger human life. Wildfires could potentially result in the destabilization of pre-existing deep-seated landslides over long time periods. How do landslides cause tsunamis?

Tsunamis are large, potentially deadly and destructive sea waves, most of which are formed as a result of submarine earthquakes. They may also result from the eruption or collapse of island or coastal volcanoes and the formation of giant landslides on marine margins. These landslides, in turn, are often triggered by earthquakes. Tsunamis can be generated on impact as a rapidly moving landslide mass enters the water or as water displaces behind and ahead of a rapidly moving underwater landslide. What are some examples of landslides that have caused tsunamis?

The 1964 Alaska earthquake caused 115 deaths in Alaska alone, with 106 of those due to tsunamis generated by tectonic uplift of the sea floor, and by localized subareal and submarine landslides. The earthquake shaking caused at least 5 local slide-generated tsunamis within minutes after the shaking began. An eyewitness account of the tsunami caused by the movement and landslides of the 1964 Alaska earthquake.

Research in the Canary Islands concludes that there have been at least five massive volcano landslides that occurred in the past, and that similar large events may occur in the future. Giant landslides have the potential of generating large tsunami waves at close and also very great distances and would have the potential to devastate large areas of coastal land as far away as the eastern seaboard of North America.

Rock falls and rock avalanches in coastal inlets, such as those that have occurred in the past at Tidal Inlet, Glacier Bay National Park, Alaska, have the potential to cause regional tsunamis that pose a hazard to coastal ecosystems and human settlements. On July 9, 1958, a magnitude M 7.9 earthquake on the Fairweather Fault triggered a rock avalanche at the head of Lituya Bay, Alaska. The landslide generated a wave that ran up 524 m on the opposite shore and sent a 30-m high wave through Lituya Bay, sinking two of three fishing boats and killing two persons.

How soon does the danger of landslides end after the rain stops?

It’s not possible to exactly predict the number of days or weeks that landslides remain a danger after heavy rain. Residents near mountain slopes, canyons, and landslide prone areas should stay alert even after heavy rain subsides. Why is southern California vulnerable to landslides?

Areas that have been burned by recent wildfires are highly susceptible to debris-flow activity that can be triggered by significantly less rainfall than that which triggers debris flows from unburned hill slopes. What was the biggest landslide in the world?

The world’s biggest historic landslide occurred during the 1980 eruption of Mount St. Helens, a volcano in the Cascade Mountain Range in the State of Washington, USA. The volume of material was 2.8 cubic kilometers (km). What was the biggest prehistoric landslide?

The world’s biggest prehistoric landslide, discovered so far on land, is in southwestern Iran, and is named the Saidmarreh landslide. The landslide is located on the Kabir Kuh anticline in Southwest Iran at 33 degrees north latitude, 47.65 degrees east longitude. The landslide has a volume of about 20 cubic kilometers, a depth of 300 m, a travel distance of 14 km and a width of 5 km. This means that about 50 billion tons of rock moved in this single event!

SELF-HEALING CONCRETE
Join us on Telegram