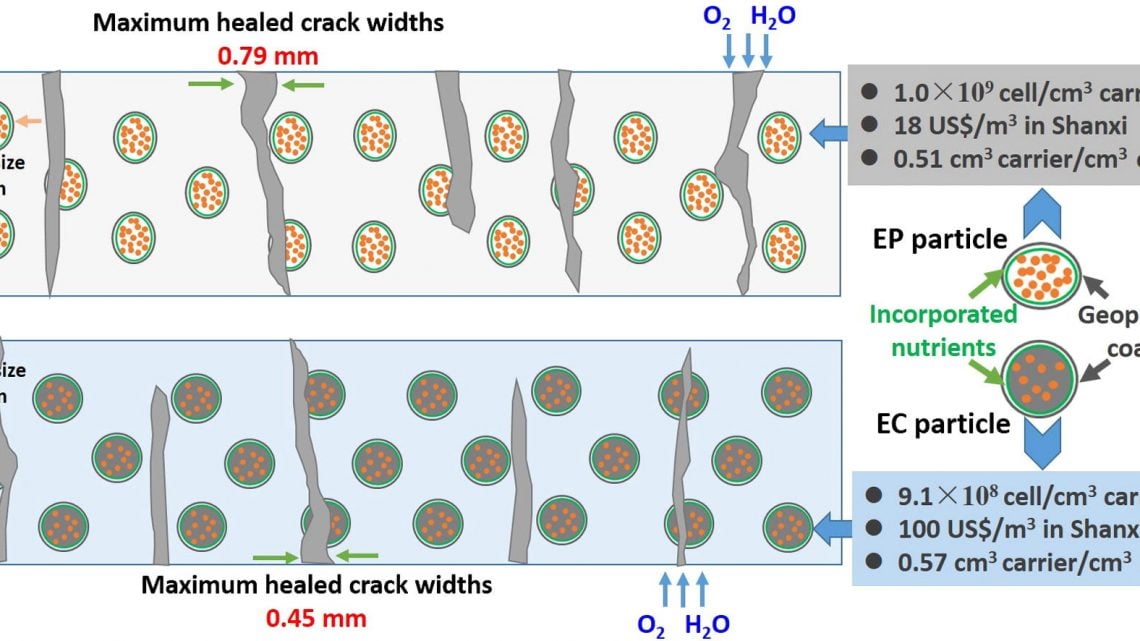 Mineral-producing bacteria have been found that could help mend micro-cracking in concrete. Dr Henk Jonkers, a micro-biologist at Delft University, talked to Ingenia about research developments in producing bioconcrete that could  bring benefits for civil engineering projects.
Self-healing concrete could solve the problem of concrete structures deteriorating well before the end of their service
life. Concrete is still one of the main materials used in the construction industry, from the foundation of buildings to the structure of bridges and underground parking lots.
Traditional concrete has a flaw, it tends to crack when subjected to tension. A healing agent that works when bacteria embedded in the concrete convert nutrients into limestone has been under development at the Civil Engineering and Geosciences Faculty in Delft since 2006.
The project is part of a wider programme to study the self-healing potential of plastics, polymers, composites, asphalt and metals as well as concrete. Dr Henk Jonkers, a microbiologist who specialises in the behaviour of bacteria in the environment, has developed self-healing concrete in the laboratory and full-scale outdoor testing will start in 2011. The
first self-healing concrete products (successful research results permitting) are expected to hit the market in two years’
time and are expected to increase the lifespan of many civil engineering structures.
Jonkers has worked closely with civil and structural engineers to learn about the properties of concrete and steel reinforcement, and develop the concrete. “For a biologist to work with civil engineers to incorporate living matter into
structural concrete material is in itself a great innovation,” he says.

Concrete will continue to be the most important building material for infrastructure but most concrete structures are
prone to cracking. Tiny cracks on the surface of the concrete make the whole structure vulnerable because water seeps in to degrade the concrete and corrode the steel reinforcement, greatly reducing the lifespan of a structure.
Concrete can withstand compressive forces very well but not tensile forces. When it is subjected to tension it starts to crack, which is why it is reinforced with steel; to withstand the tensile forces.
Structures built in a high water environment, such as underground basements and marine structures, are particularly vulnerable to corrosion of steel reinforcement. Motorway bridges are also vulnerable because salts used to de-ice the roads penetrate into the cracks in the structures and can accelerate the corrosion of steel reinforcement. In many civil engineering structures tensile forces can lead to cracks and these can occur relatively soon after the structure is built.
Repair of conventional concrete structures usually involves applying a concrete mortar which is bonded to the damaged surface. Sometimes, the mortar needs to be keyed into the existing structure with metal pins to ensure that it
does not fall away. Repairs can be particularly time consuming and expensive because it is often very difficult to gain
access to the structure to make repairs, especially if they are underground or at a great height.

HOW DOES BIOCONCRETE WORK ?

Self-healing concrete is a product that will biologically produce limestone to heal cracks that appear on the surface of concrete structures. Specially selected types of the bacteria genus Bacillus , along with a calcium-based nutrient  known as calcium lactate, and nitrogen and phosphorus, are added to the ingredients of the concrete when it is being mixed. These self-healing agents can lie dormant within the concrete for up to 200 years.
However, when a concrete structure is damaged and water starts to seep through the cracks that appear in the  concrete, the spores of the bacteria germinate on contact with the water and nutrients. Having been activated, the bacteria start to feed on the calcium lactate.
As the bacteria feeds oxygen is consumed and the soluble calcium lactate is converted to insoluble limestone. The limestone solidifies on the cracked surface, thereby sealing it up. It mimics the process by which bone fractures in
the human body are naturally healed by osteoblast cells that mineralise to re-form the bone. The consumption of  oxygen during the bacterial conversion of calcium lactate to limestone has an additional advantage. Oxygen is an essential element in the process of corrosion of steel and when the bacterial activity has consumed it all it increases the durability of steel reinforced concrete constructions.

The bioconcrete healing itself (Image Courtesy of Delft University)
The two self-healing agent parts (the bacterial spores and the calcium lactate-based nutrients) are introduced to the concrete within separate expanded clay pellets 2-4 mm wide, which ensure that the agents will not be activated during the cement-mixing process. Only when cracks open up the pellets and incoming water brings the calcium lactate into contact with the bacteria do these become activated. Testing has shown that when water seeps into the concrete, the bacteria germinate and multiply quickly. They convert the nutrients into limestone within seven days in the laboratory.
Outside, in lower temperatures, the process takes several weeks.

The starting point of the research was to find bacteria capable of surviving in an extreme alkaline environment.
Cement and water have a pH value of up to 13 when mixed together, usually a hostile environment for life:
most organisms die in an environment with a pH value of 10 or above.
The search concentrated on microbes that thrive in alkaline environments which can be found in natural environments, such as alkali lakes in Russia, carbonate-rich soils in desert areas of Spain and soda lakes in Egypt. Samples of endolithic bacteria (bacteria that can live inside stones) were collected along with bacteria found in sediments in the lakes. Strains of the bacteria genus Bacillus were found to thrive in this high-alkaline environment. Back at Delft University the bacteria from the samples were grown in a flask of water that would then be used as the part of the water mix for the concrete.
Different types of bacteria were incorporated into a small block of concrete. Each concrete block would be left for two months to set hard. Then the block would be pulverised and the remains tested to see whether the bacteria had  survived.
It was found that the only group of bacteria that were able to survive were the ones that produced spores comparable to plant seeds. Such spores have extremely thick cell walls that enable them to remain intact for up to 200 years while waiting for a better environment to germinate.
They would become activated when the concrete starts to crack, food is available, and water seeps into the structure.
This process lowers the pH of the highly alkaline concrete to values in the range (pH 10 to 11.5) where the bacterial  spores become activated.
Finding a suitable food source for the bacteria that could survive in the concrete took a long time and many different  nutrients were tried until it was discovered that calcium lactate was a carbon source that provides biomass.
If it starts to dissolve during the mixing process, calcium lactate does not interfere with the setting time of the  concrete.

RC Spreadsheets Version 4B
Join us on Telegram