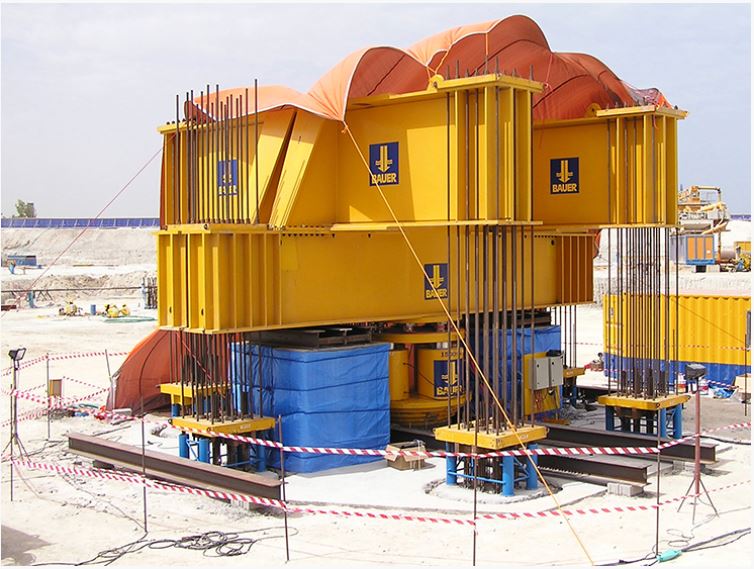 15 November 2019 Off By The Engineering Community

Pile load test are usually carried out that one or some of the following reasons are fulfilled:

the most common types of test loading procedures are Constant rate of penetration (CRP) test and the maintained load test (MLT).

In the CRP (constant rate of penetration) method, test pile is jacked into the soil, the load being adjusted to give constant rate of downward movement to the pile. This is maintained until point of failure is reached.

Failure of the pile is defined in to two ways that as the load at which the pile continues to move downward without further increase in load, or according to the BS, the load which the penetration reaches a value equal to one-tenth of the diameter of the pile at the base. 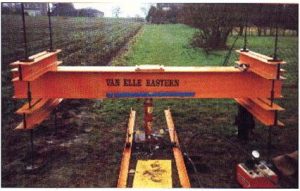 Fig.1 – Test being carried out

Fig.1, In the cases of where compression tests are being carried out, the following methods are usually employed to apply the load or downward force on the pile:

A platform is constructed on the head of the pile on which a mass of heavy material, termed “kentledge” is placed. Or a bridge, carried on temporary supports, is constructed over the test pile and loaded with kentledge. The ram of a hydraulic jack, placed on the pile head, bears on a cross-head beneath the bridge beams, so that a total reaction equal to the weight of the bridge and its load may be obtained.

Fig.2, the maintained increment load test, kentledge or adjacent tension piles or soil anchors are used to provide a reaction for the test load applied by jacking(s) placed over the pile being tested. The load is increased in definite steps, and is sustained at each level of loading until all settlements has either stop or does not exceed a specified amount of in a certain given period of time. 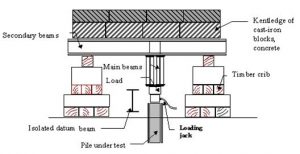