you are here Accueil | ENGINEERING ARTICLES | Civil Engineering Articles | Roads Paved with Plastic Bottles: Making Use of an Ecological Threat 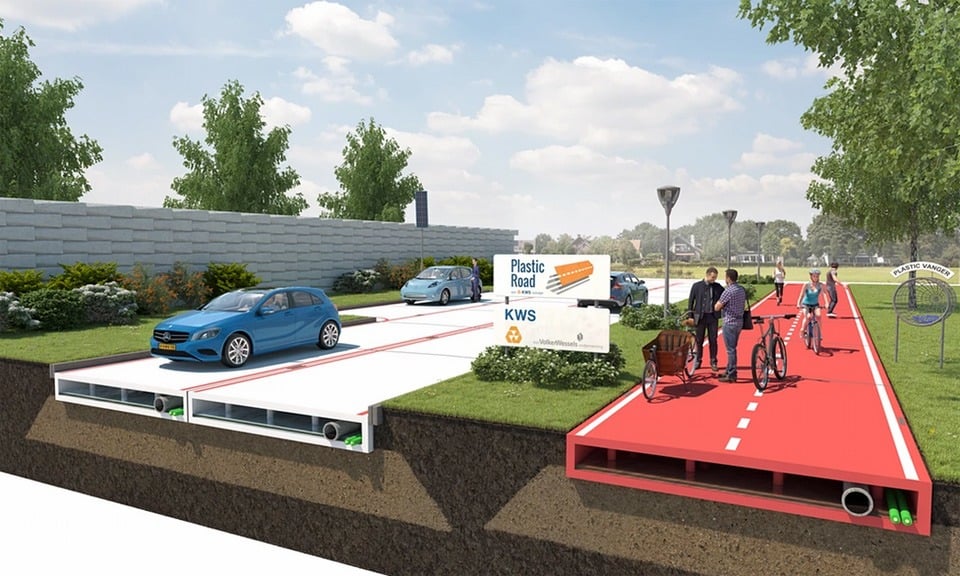 10 August 2018 Off By The Engineering Community

Rotterdam in the Netherlands may become the first city to repurpose one of Earth’s biggest pollutants by paving its streets with plastic bottles. The Rotterdam City Council is working out a way to efficiently pilot a new type of plastic road surface since their initial declaration in 2015.

The concept raises some concerns. Heat on all-plastic surface may be a problem, as plastic, just like asphalt, can soften under higher temperatures. And the engineers behind the project are working to ensure that the roads are capable of withstanding both the heat and the abuse from constant traffic.

VolkerWessels, a European construction firm, addressed concerns by creating and testing a surface made entirely from plastic. Results suggest that the surface required less maintenance than typical road surfaces and could even withstand extreme temperatures of -40°C to 80°C (-40°F to 176°F).

A Plastic Road Hybrid with Roots in India

While the process is still ongoing in the Netherlands, a UK start-up called MacRebur is succeeding in persuading local councils to use plastic to pave new roads. Cumbria in northwest England has become the first county to turn its local waste into roads.

The project began in a small farmhouse in Lockerbie, Scotland, led by the plastic-road pioneer Toby McCartney.

“We use waste plastics to add into an asphalt mix to create a stronger, longer-lasting pothole free road,” Mr. McCartney says.

Mr. McCartney’s idea came about during his trip to India, where he witnessed the locals pouring plastic into the potholes. The plastic was then burnt into the potholes and smoothed over, fixing the holes and at the same time, making use of the plastic waste. Mr. McCartney left India inspired. But he didn’t act on the idea until until later, back home, when he heard the response his daughter gave when her school teacher asked what lived in our oceans. She said “plastics, miss.” And Mr. McCartney sought to make a change.

How is it done?

The secret lies in a mixture of plastic pellets, but the details are proprietary.

“I give the analogy of Irn Bru, we will never tell anyone what is actually in our mix,” Mr. McCartney says.

Normally, roads are comprised of about 90 percent rocks, limestone and sand, with roughly 10% bitumen used to bind it. Bitumen is extracted from crude oil. The plastic pellets replace a significant part of the bitumen, and can be made from household waste, and commercial waste.

Mr. McCartney regularly receives large bundles of waste, most of which is destined to end up in landfill, or is thrown into the incinerator. The waste plastic however, is processed into millions of pellets at an asphalt plant, where bags of pellets are mixed with quarried rock and bitumen. The result is a road that repurposes plastic waste and lasts longer and costs less than typical roads , Mr. McCartney says.

Can Plastic-Eating Caterpillars Cause Chaos?

The strangest dilemma the might roads face isn’t from the heat, or the weight of the cars. Instead, it may come in the form of hungry caterpillars.

The question arose while researching the possible hazards linked to this innovation in road materials. Plastic-eating caterpillars are a blessing, as their ability to eat through plastic could eventually solve some plastic waste issues. But could they also eat through plastic roads?

Experimenters at Cambridge have discovered that the caterpillars ‘can break down the chemical bonds of plastic in a similar way to digesting beeswax.’ Dr Paolo Bombelli – a scientist as Cambridge University believes that the caterpillars are just the starting point and that “we need to understand the details under which this process operates.”

Alan Read, owner of Ames Pest Control believes that the caterpillars aren’t strong enough to eat through the roads, however:

“The roads look as if they go through multiple safety tests and chemical transformations before being laid onto the roads. Even if thousands of these caterpillars were to focus on eating through one particular section, it would take months, if not years to make a dent. There really is no cause for concern.”

A Bright Future for the Use of Plastic

Either way, with plastic-eating caterpillars and plastic-infused roads slowly making their appearance in contemporary society, it only looks good for the future of our eco-system.