Segregation is the separation of constituent materials in concrete. There are three common types of segregation:

Segregation of concrete affects strength and durability in structures. When this is detected, elements affected should be demolished.

The segregation includes undesirable properties in the hardened concrete; therefore, it can cause honeycombing and may leads to the development of cavities in the concrete surface. 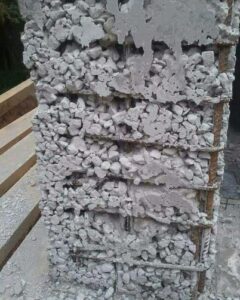 a – Causes of concrete segregation:

The main causes are:

Bleeding is a form of segregation in which water present in the concrete mix is pushed upwards due to the settlement of cement and aggregate. The specific gravity of water is low, due to this water tends to move upwards.

Some bleeding is normal but excessive bleeding can be problematic.

Not all bleed water will reach the surface of the concrete but some water may rise and remain trapped under aggregates and reinforcing. This results in the weakening of the bond between the paste and those elements. 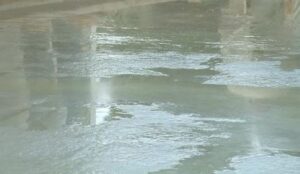 The principal causes of bleeding are:

Due to the formation of Laitance, structures may lose its wearing capacity and decreases its life.

Water while moving from bottom to the top, forms continuous channels. Due to these channels, concrete becomes permeable and allow water to move, which forms water voids in the matrix and reduces the bond between aggregate and the cement paste.

Forming of water at the top surface of concrete results in delaying the surface finishing and so concrete becomes permeable and loses its homogeneity.

Excessive bleeding breaks the bond between the reinforcement and concrete.

To avoid concrete bleeding, it is recommended to:

What is Plum Concrete?

What is the difference between Pre-tension and Post-tension in concrete?
Join us on Telegram