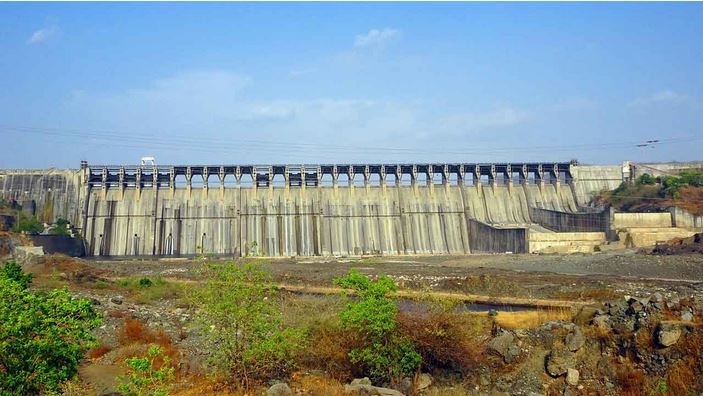 24 December 2019 Off By The Engineering Community

Gravity dams are solid concrete structures that maintain their stability against design loads from the geometric shape and the mass and strength of the concrete. Generally, they are constructed on a straight axis,
but may be slightly curved or angled to accommodate the specific site conditions. 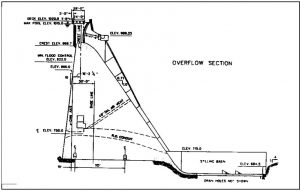 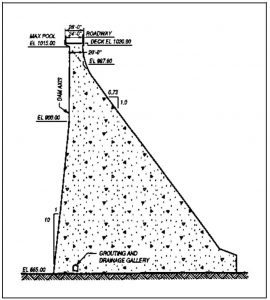 Construction incorporates methods that have been developed and perfected over many years of designing and building mass concrete dams. The cement hydration process of conventional concrete limits the size and rate of concrete placement and necessitates building in monoliths to meet crack control requirements.

Construction procedures include batching and mixing, and transportation, placement, vibration, cooling, curing, and preparation of horizontal construction joints between lifts.

The large volume of concrete in a gravity dam normally justifies an onsite batch plant, and requires an aggregate source of adequate quality and quantity, located at or within an economical distance of the project.

Transportation from the batch plant to the dam is generally performed in buckets ranging in size from 4 to 12 cubic yards carried by truck, rail, cranes, cableways, or a combination of these methods. The maximum bucket size is usually restricted by the capability of effectively spreading and vibrating the concrete pile after it is dumped from the bucket. The concrete is placed in lifts of 5- to 10-foot depths. Each lift consists of successive layers not exceeding 18 to 20 inches. Vibration is generally performed by large one-man, air-driven, spud-type vibrators.

Methods of cleaning horizontal construction joints to remove the weak laitance film on the surface during curing include green cutting, wet sand-blasting, and high-pressure air-water jet. Additional details of conventional concrete placements are covered in EM 1110-2-2000.

Control measures involve precooling and postcooling techniques to limit the peak temperatures and control the  temperature drop. Reduction in the cement content and cement replacement with pozzolans have reduced the temperature-rise potential. Crack control is achieved by constructing the conventional concrete gravity dam in a series of individually stable monoliths separated by transverse contraction joints.

The design of RCC gravity dams is similar to conventional concrete structures. The differences lie in the construction methods, concrete mix design, and details of the appurtenant structures. Construction of an RCC dam is a relatively new and economical concept.

Economic advantages are achieved with rapid placement using construction techniques that are similar to those employed for embankment dams. RCC is a relatively dry, lean, zero slump concrete material containing coarse and fine aggregate that is consolidated by external vibration using vibratory rollers, dozer, and other heavy equipment.

In the hardened condition, RCC has similar properties to conventional concrete. For effective consolidation, RCC must be dry enough to support the weight of the construction equipment, but have a consistency wet enough to permit
adequate distribution of the past binder throughout the mass during the mixing and vibration process and, thus,
achieve the necessary compaction of the RCC and prevention of undesirable segregation and voids.

Spillway Function and Classification
Join us on Telegram