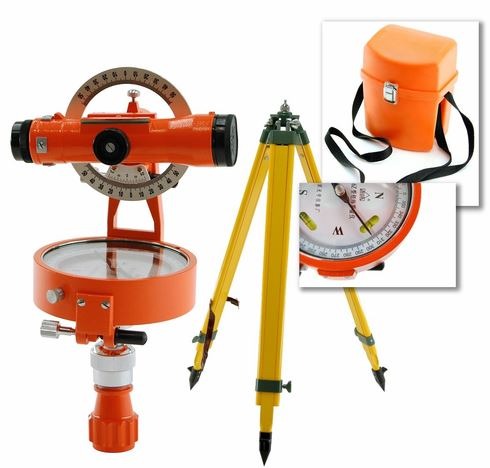 24 December 2019 Off By The Engineering Community

Compass surveying is the branch of surveying in which directions of survey lines are determined with compass and the lengths of the lines are measured with a tape or a chain. In compass surveying the direction of survey line called the bearing of line is defined as the angle made by the line with the magnetic meridian. In practice compass is generally employed to run a traverse. Traverse consists of series of straight lines connected together to form an open or closed traverse.

Compass consists of cylindrical metal box of about 8-12 cm diameter in the center of which is a pivot carrying a magnetic needle which is already attached to the graduated aluminum ring. The ring is graduated and is read by reflecting prism. Diametrically opposite to the prism is the object vane hinged to the box side carrying a horse hair with which the object in the field is bisected.

There are two forms of compass as under

The two compass are almost same except few differences so far as their construction is concerned. Prismatic compass uses WCB (0⁰­­-360⁰) circular ring while as the surveyors compass uses Quadrantal Bearing (0⁰­­-90⁰) circular ring system. Besides bearing system, the former has graduated ring attached to magnetic needle as the result of which when compass box and sight vane is rotated the needle remains stationary on the other hand in surveyors compass graduated ring being attached to compass box moves with it as the box is rotated

Centering involves to align the compass is such a way the Centre is placed vertically over the station point. It is done with the help of tripod stand and is checked by dropping a small pebble below the Centre of compass.

Levelling is done so that the graduated ring swings quite freely. It is done with the help of ball and socket arrangement and can be checked by rolling a round-pencil on the compass box

Observing the bearing once centering and levelling has been done, raise or lower the prism until the graduations on the ring are clearly visible when looked through the prism. Afterwards turn compass-box until the ranging rod at the station is bisected by horse-hair of objective vane. At this position note down the reading.

Compass surveying is used in case of rough surveys where speed and not accuracy is main consideration. One of the biggest disadvantages of compass is that magnetic needle which gives bearing of lines is disturbed from its normal position in presence of materials such as iron-pipes , current carrying wires , proximity of steel structures , transmission lines etc. called sources of local attraction.

Top 10 Questions You May Have about LiDAR

Types of Concrete Gravity Dams
Join us on Telegram